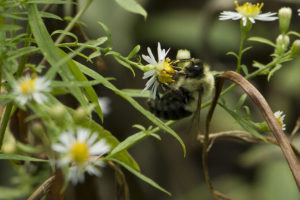 Before food becomes food, what does it sound like? This may sound like an odd question, but in actuality, much of the time it sounds like a buzz. According to the US Department of Agriculture, one out of every three bites of food we eat exists because of pollinators, such as bees, flies, and even butterflies.

Unfortunately, there is a major global decline in the pollinator population that started at the end of the twentieth century and continues today. A list of possible reasons for the decline range from agricultural practices where native wildflowers are removed, pesticide exposure, to parasites, pathogens, and climate change. Our need to have a nicely groomed, solid green lawn instead of native wildflowers also adds to this equation. We all desire nice lawns, but this may be the time where we redefine what “nice” means. 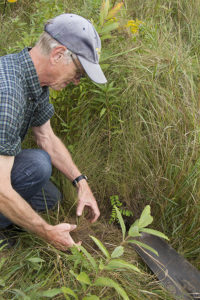 A group of five of us decided to take on this large issue in our own little corner of the world yesterday. Two Woodland Dunes staff members and 3 volunteers went into a secluded area on the preserve with over 100 native plants that are known to be good for pollinators and started planting. On Monday, students from the Two Rivers High School will be planting hundreds more. Eventually, 1,200 native wildflowers will be in the ground, thanks to a grant from the Bayer, Feed A Bee program. The new plots are being established specifically to offer increased habitat and nutrition sources for local pollinators.

Creating more bee food on Woodland Dunes property is important in taking steps to reverse the pollinator decline, but also because historically, it’s been home to a variety of bee species. One such bee is the rusty-patched bumblebee, a pollinator that has been found in Manitowoc County and was considered common 30 years ago. The rusty-patched is known to pollinate at least 65 varieties of plant species. It is now listed as endangered.

Fortunately, pollinator corridors, plots and “stepping stones” are increasing in popularity. Woodland Dunes is collaborating with Still Bend, the Frank Lloyd Wright house in Two Rivers, to develop a native landscaping plan in order for it to become a “pollinator showcase.” The idea, according to Michael Dittmer, Still Bend owner, is to inspire other homeowners in the area to add pollinator-friendly plants to their landscaping. We will also be donating and planting wildflowers in the corridor along Mariner’s Trail.  This isn’t a new idea, but it’s one worth spreading. Seattle Washington has responded to the decline creatively. A local artist, Sarah Bergmann, designed a “Pollinator Pathway” on a mile-long, city-owned grass strip between the street and sidewalk. Citizens living along this street adopt portions of it, planting native wildflowers and committing to takecare of their areas. Their goal is to attract pollinators in an urban setting and eventually connecting them to a larger green space.

Looking at the pollinator decline as a whole can be overwhelming, but if we realize that many small corners of the world are being taken care of by collaborating partnerships, it gives us a chance to feel hope. So let’s put our garden gloves on, some native wildflowers in the soil, and feed some bees!