↓
Home Menu ↓
Skip to primary content
Skip to secondary content
Somehow, its the middle of January and winter is half over. Temperatures are more normal, but we are still wishing that our lives could be.  Outside, life goes on as best it can. True hibernators, like woodchucks and ground squirrels are sleeping, sustained by their fat reserves. Amphibians are in a frozen or near-frozen state in the soil or at the bottoms of ponds. Birds congregate around food sources- yard birds around our feeders, including a couple of lingering red-winged blackbirds at the nature center, hawks patrol open fields joined by a few snowy owls, and harbors are populated by ducks and gulls, some of which have journeyed here from the far north. Eagles, too, have gathered along the shore, making meals of the dead or slow-moving. We know that spring is not too far off- great-horned owls are courting, and foxes and coyotes are calling for mates.
The incredibly complex web of life continues to be woven and more strands of which it is composed of give it stability.  We are aware of the parts easily seen, but that is only a small sample of all that makes up the natural world. Some of the tiniest parts are powerful like the virus and its variants which plague us right now.  Or the fungus that lives in the soil and allows the forest to prosper.  Most people don’t seem to be aware of this, or at least don’t appreciate it.  That lack of understanding can lead us to try to force nature to do things which are not possible, or at least not sustainable.
I think native or indigenous people, as a result of thousands of years of experience living on the land, had a better understanding of what nature offers to us rather than our forcing nature to give us what we want. More and more I try to think in those terms- trying to fit what I want to what nature wants or needs. Will the kind of tree I want to plant fit in with the community around it? Is it appropriate to mow or cut the area we wish to manage? How will the habitat react to what we propose to do? Eventually, it comes down to how does nature feel about our actions.
I can think of situations which reflect both approval and disapproval of nature. In some places we remove invasive plants and replace them with native trees, which absolutely thrive.  They exceed our expectations, fitting in and in a few years contributing to the health of the land.  And I have known other cases where what we tried to do was not compatible, resulting in extra work to maintain and unhappy plants. It is hard to know what will work, especially if one doesn’t spend enough time trying to understand what the land wants and needs.
I’m afraid there are many cases where we think we can do whatever we want regardless of nature’s needs. The result is a sickly landscape: numbers of birds declining, invasive species randomly scattered all around, creating an abnormal climate. In the same way we think we can force others to do what we want. Both of these, if done thoughtlessly, produce more harm than good. For thousands of years we have been told how we should treat nature and each other.  Sometimes we listen, and I hope we do so more and more.
Woodland Dunes was given a photo, taken perhaps 100 years ago, of a native family’s encampment on what is now property owned by us. What strikes me is that the child in the photo appears to be so sad. I don’t know exactly what the circumstances were, but I have that photo on the desktop of my computer as a reminder of the people who lived here before us, and of the importance of caring for nature and each other. I truly hope that we can work together to do both. 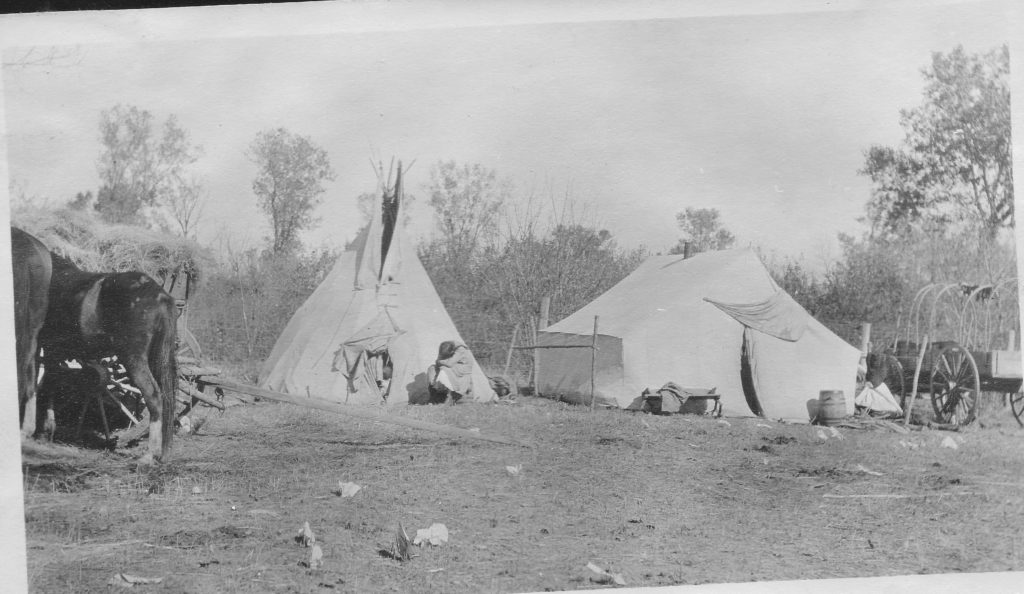 photo- native encampment near Woodland Dunes (Mandel farm), given to the nature center by Linda Thorne.