Ripples from the Dunes, by Kennedy Zittle, Assistant Naturalist

Recently there has been a new visitor to the bird feeders outside of my office window. Though I appreciate the daily visits from 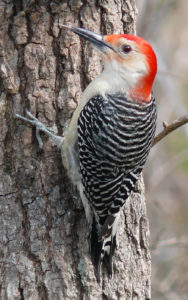 the same birds – chickadees, house finches, cardinals, and juncos… it is nice to see a new visitor hanging around (literally). This visitor has been spotted hanging from the suet feeder, seemingly oblivious to the chickadees and house finches squabbling at the feeder below it. When I was little, I used to sit and watch outside of my grandparents’ windows to see this bird hanging down from the suet feeders that they had in the trees. For some reason it became one of my favorite birds, and seeing it now always brings a smile to my face, as it feels like a visit from an old friend.

This visitor is more formally known as the red-bellied woodpecker (Melanerpes carolinus). These birds live in the eastern portion of the United States and range from as far south as Florida to as far north as Canada. They are often found living in deciduous forests, especially along rivers and in swamps.

The red-bellied woodpecker makes a variety of different calls. The most common one is a shrill “churr churr churr” sound that both the males and females make. Other sounds include a purring type sound “qurrr”, a series of “kek” notes (similar to a Northern Flicker’s call), and a “cha cha cha” sound similar to a coughing noise. These woodpeckers also drum (drumming is when the bird hammers their beak against a loud or resonant object). They will drum on hollow trees, metal roofs and gutters, etc. to get their sounds to travel to other woodpeckers nearby.

Red-bellied woodpeckers are omnivores. They mainly eat insects, but also eat fruits, nuts, and seeds. A red-bellied woodpecker can stick its tongue out nearly 2 inches past the end of its beak – this helps them reach insects from the insides of the trees. Speaking of trees, like many other animals, these woodpeckers rely on dead and dying trees for their nests and food sources. These woodpeckers will excavate holes in dead, dying, or soft-wooded trees. By doing this they are not only creating a home for themselves, but also help out other forest animals too. Other animals like squirrels and bats use their holes for shelter. Recent studies have found that in areas where dead trees were removed the red-bellied woodpecker’s breeding rates greatly decreased. Keeping dead trees (where they do not pose a danger to anyone walking around) is a great way to help maintain the habitat that so many forest animals rely on.

As I finish writing this, the red-bellied woodpecker is sitting on the trunk of the cherry tree, surveying the feeders as he does with each visit before he swoops down to the suet. It is another wonderful day here at the dunes, with wonderful visitors, both human and birds alike.