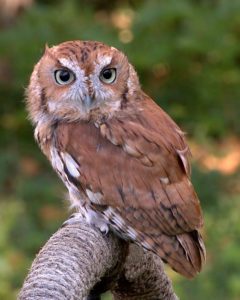 I don’t know that we are so much creatures of habit as much as people just trying to manage busy schedules.  I am always amazed at what people can accomplish in a day, although somehow I only manage to complete a fraction of my daily to-do list.  Usually because I’m sidetracked by other things.  Getting enough sleep seems to become more and more important with age, and from what I’ve read its important to maintain a consistent sleep schedule.  Like many things, that can be easier said than done, and sometimes one ends up ruminating about the day’s problems rather than allowing ourselves to restore our brains as we should.  I wonder if animals face that issue. Our pets seem to sleep 20 hours per day regardless – unless there is something important like a thunderstorm to worry about.  Their lives seem to be more efficient than ours.
For me, coolness makes it easier to sleep so often the window is open a crack. Being able to hear the outside is interesting, with each season revealing different aspects by the sounds that accompany it.  Coyotes howl occasionally and foxes bark.  In spring, young fawns sound like sheep, and certain birds will sing at times all night.  In summer and early fall the others fall silent and insects take over until frost puts an end to them.  Then, in fall and winter when others are quiet, the calls of owls become more apparent.  Great horned owls court each other beginning in late fall, and are common even in our cities.  And if one is lucky, they may hear a high-pitched descending whinny or a monotone trembling note, the song of the eastern screech owl.
We have been lucky to have screech owls in our neighborhood for more than two years, thanks to a neighbor who doesn’t mind them nesting in his wood duck houses.  They are found in many locations in our area, both country and city. They’re tiny owls which often pass unnoticed unless they call.  They’re just slightly larger than the saw-whet owl at nine inches tall, and like us have more than one race. They can either be rusty or gray in color – rusty more common in the east with more grays to the west of their range. We are at the northern extent of that, although with a warming climate they seem to be moving north and were found for the first time near Ashland a couple of years ago. They seem to tolerate many of the changes we humans have made to the world, but prefer a forest with an open understory, not too many shrubs.  Perhaps that makes it easier to catch mice upon which they depend.  They also prey on small birds, who in turn will mob the wonderfully camouflaged owls, revealing its location.
Unlike other owls the screechs will nest in man-made boxes and even visit bird baths to drink and wash.  They seem to have more young in suburban locations, possibly because there are fewer predators (other owls, mainly) than in the forest.  The females are larger than their mates as in most raptors, but while she is on the nest the male does the hunting, which must keep him very busy.  And although they appear cute and cuddly, there can be life-or-death competition for food among baby birds in the nest, with the smallest sometimes losing out.
Screech owls appear to mate for life, which can be up to 14 years.  It sounds romantic, doesn’t it?  Well, even though they do, the male might have a second mate on the side, but they are certainly not the only species to exhibit that sort of wanderlust.
Screech owls are another example of wildlife which is common but often unknown to us unless we know where to look.  Compared to many creatures they are obvious, and the more we study them the more we learn how they interact with us.  They impact the world in ways we don’t fully understand, and I always wonder how many other important animals and plants we take for granted without thinking.  Nevertheless, I consider myself lucky to hear screech owls in the middle of the night, and to know that they still call from hidden perches along our Lakeshore.  May it always be that way.