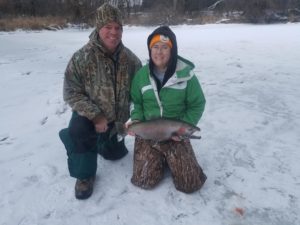 With the recent cold spell, the lakes and rivers have been busy making ice.  For many people, this is a blessing within what might otherwise be a dreary time of year.  Ice fishing shanties, both the pop up tent variety and more permanent structures, can be seen lining rivers and lakes as people work to fill their freezers with fish, or simply enjoy each other’s company.  I like to eat wild caught and locally grown food whenever possible, and know as much as I can about where my food comes from and what went into growing it.  This is also a great excuse to get outside and just enjoy not being cooped up in a house.

Recently, I had the opportunity to try my luck at catching trout and salmon under the ice on the Sheboygan River.  The fishing had been slow in the days leading up to my trip, possibly due to lack of current in the river and the slushiness of the water below the ice.  On the first day of a warming spell, we were slightly optimistic that we would see a pickup in action.  After being out for just a couple hours, we were lucky enough to have a fish on the line.  After an incredible moment spent reeling in our catch, we discovered that we had a nice steelhead.

It is interesting to note that steelhead and rainbow trout are genetically the same species, Oncorhynchus mykiss.  However, historically, they led different lives and that is what led to the distinction.  While rainbow trout are resident fish, steelhead trout are anadromous, meaning they migrate.  Steelhead trout in our area spend most of their time in Lake Michigan and reproduce in the tributary rivers.  Rainbow trout and steelhead are not native to Wisconsin, and have to be reared and stocked.  In their native range, steelhead trout migrate to salt water oceans.  In the case of the local population, Lake Michigan is substituted for the ocean.  What causes a species to have two different life styles?   Scientists are still studying this species and current research suggests a complex interaction between genetics, the state of the individual, and the environment.  Whatever the reason, it is another example of the wonder of nature.   John McMillian, the science director for Trout Unlimited, stated in 2015, “There is no ‘normal’ population of O. mykiss. They literally are the fish of a thousand faces.”

As we fish through the ice we can only imagine (unless we have an underwater video cam) the amazing world beneath the surface of our rivers and lakes.  Steelhead are interesting, colorful, and energetic creatures that make the underwater world even more exciting.  And, they help us enjoy the season that perhaps defines our State and the hardy wildlife and people who live here.