Winter is bottoming out now, and we’ve had our coldest temperatures so far this season. A lot of animals have settled in, either sleeping the whole thing off or frequenting places that provide the food, water, and shelter they need. Bird feeders at the nature center and at home are very busy, and tracks in the snow indicate that many mammals are as well. There are some unusual stragglers, as indicated by reports to the eBird project database, but largely things seem to be as one would expect for late January in Wisconsin.

That being said, the first hints of change are already in the air. The little flock of starlings that sit in the maple tree next to my house are starting to become very vocal in the morning, uttering a variety of squeaks and squeals and songs of other birds. Chickadees and nuthatches have begun calling for mates even though it’s far too early for nesting, and cardinals are starting to sing on the nicest mornings. In a week or two the horned larks will show up on roadsides as singles or pairs and begin to sing as well on nice days.

As those little songbirds start to dream of love that will happen later in spring (I wonder if they realize how much work is ahead of them raising nestlings), other animals are really getting down to the business of starting this year’s brood. Great horned owls have been calling for a couple of months, and in the next month or so the bonded pairs will nest even though there still might be snow on the ground. Their young will be venturing out of the nest in May and fledge in early summer, and they take a long time to grow to self-sufficiency. 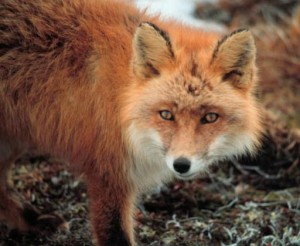 In the last week a couple of friends have mentioned hearing foxes- they too have the reproductive itch now. Usually, foxes are quiet, and I’m usually surprised at seeing one glide along a trail on across the forest floor. But female red foxes become fertile in the middle of January in southern Wisconsin, and can be heard calling. Both male and female can utter short barks like a dog, and sometimes longer screams and various other sounds. Foxes are monogamous and mated pairs stay together. When she is receptive to him, they often retire to the privacy of an excavated den where mating, and a couple of months later, the rearing of the kits will occur. By May, the kits are venturing out around their dens to explore their world, and will stay with their parents until fall. Then they disperse, and by the time they are 10 months of age they are adults themselves.

Red foxes are common- they came to North America during the Ice Age and do just fine with people around, even though we hunt or trap them for their hides. They are able to adapt and do well around people. This is perhaps the best time to experience them- their tracks, their calls, their freshly dug dens, even the musky scent that accompanies their excavations. There are several fox territories within the Woodland Dunes preserve, and a walk on the trails on a mild winter day will likely result in a fox encounter in some way- just one more thing to look forward to from time spent outdoors.