The most difficult thing about working at a nature center are the times when it is necessary to stay indoors at a desk instead of exploring the amazing world outside. Every day and every square foot in a nature preserve is different and presents new challenges to our understanding of life.

A question from a volunteer gave me an excuse to walk the Cattail Trail boardwalk, which in the winter is a wonderful place to look for evidence of wildlife. Less than an inch of fresh snow was perfect for tracking. Animals are always present and active on the trails, but without snow we actually have to be there when they are to experience them. In winter, it’s as if the whole world is a benign crime scene that has been freshly dusted for fingerprints, or rather footprints, and recent activity of the animals is revealed for all.

At the beginning of the boardwalk there were tracks of a red fox- possibly the same one we’ve seen a number of times hunting and marking his territory right around our headquarters. This time of year, foxes are pretty solitary, although soon their thoughts will become more amorous and they’ll seek the company of the opposite sex. The sandy soil is easy to dig and lends itself to den construction, where the kits will be born in a couple of months. The fox traveled on and beneath the boardwalk and across the pond, into the vegetation beyond. 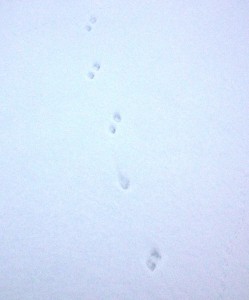 Farther down the boardwalk, small, paired tracks appeared, and disappeared. A weasel, probably short-tailed, climbed an alder to reach the deck, bounded along for thirty feet or so, then circled before leaping off into the alders again. I would have enjoyed seeing it, pure white this time of year except for a black tail-tip. Its journey on the boardwalk probably only lasted a few seconds, judging by previous attempts to get good looks at weasels, as they are like furred lightning. One can only imagine the terror felt by the unlucky mouse that was probably the object of the weasel’s hunt.

At the end of the boardwalk, where it meets Rahmlow Creek in the marsh, there were several curiosities. The first was the result of an enterprising muskrat, which has decided to take over the staircase to the canoe landing and add to its structure a house of cut cattail stems and mud. With the high Lake and river levels now, the landing itself is under water/ice so there’s no harm done. One can imagine the little muskrat eyeing the structure and evaluating just how it might be of use to him. Humans aren’t the only ones to realize it’s better to work smart and not hard.

But perhaps to concern of the muskrat were mink tracks on the ice next to the lodge. Mink are expert muskrat hunters, weasels 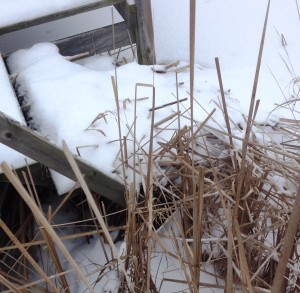 of sufficient size and strength to dig into a lodge and enjoy no doubt a number of meals from one victim. Another, even larger weasel- an otter- also left tracks out on the ice at the boardwalk’s end. Between the weasels and foxes the herbivores of the marsh must always watch out. The predators provide a needed balance to the ecosystem, something that I didn’t realize when I was young and predators of all kinds were viewed as something to be eradicated. Unfortunately, that selfish point of view still persists to some extent.

So although the world may seem void of life this time of year, animals that go unnoticed when it’s snowless make themselves known in the winter. A walk outside this time of year can be no less enjoyable and rewarding than a stroll on the nicest summer day.