They’ve been making a mess in my yard. Pinecones carpet the grass and snippets of spruce branches lay strewn about. It seems as if they are always throwing temper tantrums, stamping their feet and flicking their tails in disapproval as they chatter endlessly. They terrorize gray squirrels and chase some of the birds, moving about their day in a hurried frenzy. Red squirrels may be the smallest squirrel species in Wisconsin, but they are fierce little mammals that bring drama and interest to wildlife watching. 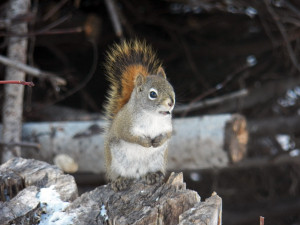 Red squirrels are native to Wisconsin and have one of the widest distributions of any squirrel in North America. They can be found north across most of Canada and Alaska, south along the Rocky Mountains to Arizona and New Mexico and east to parts of Tennessee and Georgia. They live in coniferous forests, but also thrive in deciduous forests and suburban areas in their range. There is even a unique sub-species of red squirrel found on Isle Royale in Lake Superior.

Their diet consists of pinecone seeds and other seeds, nuts, buds, fruit and mushrooms. Interestingly, red squirrels can eat Amanita mushrooms, which are poisonous to humans. They often hang mushrooms on trees to allow them to dry and will consume them later. They are surprisingly omnivorous and eat baby birds, bird eggs, insects, frogs and carrion (dead animals). In the spring, they eat tree sap, gnawing away the tips of maple twigs to allow the sap to drip out. One field guide suggested red squirrels would eat anything that won’t eat them. That is quite a varied diet! 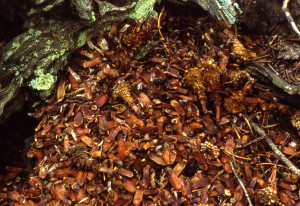 They are active during the day, appearing to be busy as they scurry about likely preparing for winter. Red squirrels remain active during winter, though they may hunker down on exceptionally cold days. To make it through the cold winter months, they cache food. This was very evident when I was at Glacier National Park in August. My husband parked our truck under a pine tree at the campsite. We were relaxing after a long hike, when suddenly we heard, “thunk!” We heard it again and again, and then realized a red squirrel was chewing off small pinecones that fell directly onto the truck. After bombarding the truck with several cones, the squirrel ran down the tree, carefully positioned one cone in its mouth and ran past us to hide the food. It did this continuously, darting just beyond our feet, as if it didn’t care we were there. Red squirrels are hoarders and pile their food in middens, which contains messy leftovers from eating and food to dine on later.

Red squirrels also grow thicker fur for winter and find shelter in tree cavities on cold windy days. During the warmer months, they construct a ball-shaped, grassy nest called a drey. These are half the size of gray squirrel dreys and contain grasses, grapevine bark, lichen and leaves.   They may be noisy, messy, troublemakers with a big attitude, but red squirrels are entertaining to observe.