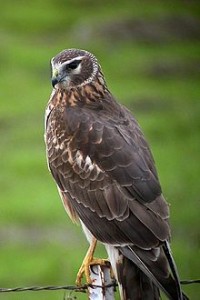 Last Saturday evening, my husband and I decided to go out on a “wild” date. We packed binoculars, hats, gloves and warm jackets and drove to the Southeastern part of Calumet County. Our destination was the Killsnake Wildlife Area. We arrived around 4:15pm, parked the car and waited with binoculars resting in our laps. We scanned the fields and almost immediately were greeted by a large, lean bird with a white rump, sweeping over the landscape. Then we saw another and another! There were at least eight Northern Harriers flying low over the grassy fields around us, likely looking for one last meal before sunset.   Northern harriers are owl-like hawks that rely heavily on their sense of hearing to capture prey.

Similar to owls, they have a disc-shaped face and stiff facial feathers that direct sound to their ears. This time of year, harriers feed primarily on meadow voles. During the breeding season, they eat a more varied diet of mice, snakes, voles, grasshoppers, toads, frogs and even small birds such as meadowlarks and song sparrows. Northern harriers live in marshes, fields and prairies and nest on the ground. During the spring and summer months, I regularly see them in the marsh at the Nature Center and in the grassland on Goodwin Road, but usually just one or two at a time. Observing eight of these birds at once was a delight and we enjoyed watching them glide just above the ground, wings held in a v-shape. 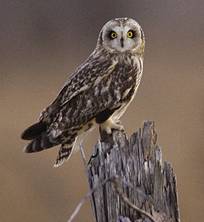 As the sun was setting and the light grew dim, we noticed just one harrier was left. Suddenly, something caught my eye, and I turned to see a bird flying almost at my eye level. It flew slower than the harriers, had a shorter tail and its wing beats were reminiscent of a bat. It was the reason for our “wild” date to Killsnake – it was a short-eared owl!

Over the next couple of minutes, five more owls appeared. Like the harriers, short-eared owls fly low to the ground, following the contours of the landscape, listening for voles and mice. They are the most diurnal of all northeastern owls, meaning they are mostly active around dawn and dusk. Short-eared owls are medium sized and have a round, beige face and small ear tufts on the top of their head. They live in open grasslands, tundra, sedge meadows, hayfields and also nest on the ground. Short-eared owls are known to congregate in the early winter months in habitats that have a high population of voles. As the snow piles up or the prey population is depleted, the owls will move on and some will migrate to the southern half of the United States.   As the last hints of daylight faded, we drove home, grateful for our “wild” night out and for the abundance of natural beauty in our area.