I had the good fortune to have a few hours off on a weekday morning recently, and was able to sit at our kitchen table, cup in hand, reading email while watching the birds fill their bellies at the feeders.  There was an awful lot of activity despite the mild weather that day- a band of chickadees, white and red-breasted nuthatches, goldfinches and pine siskins, blue jays, house finches, juncos and a tree sparrow, several different woodpeckers, and a handful of lowly house sparrows.  Their pleasant business was far more interesting than the droning tv screen on the other side of the room, and I happily sipped and clicked away.

Then suddenly one of the goldfinches made a beeline towards me, perhaps attracted by a flower that was on the windowsill.  She flew straight in and hit the glass head on with a sickening thud.  She recovered slightly, enough to make a soft landing on a small table on our deck.  There she sat panting for a few seconds.  Then her panting became more labored, and after another minute her tail vibrated, and she died.

A male goldfinch flew in and sat near the dead one.  Then it hopped closer, inspecting the tiny corpse that was either a companion or mate for a while, flying from perch to perch to look from different angles and making soft call notes.  Then, apparently giving up on its friend, it flew back to the feeders to join the others.  Suddenly, my coffee didn’t taste as good. 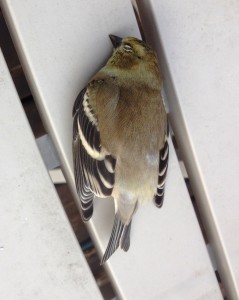 I know- accidents happen, and this is just a small bird that many don’t consider capable of meaningful consciousness, but it still bothers me.  Our window facing the feeders is fairly cluttered with miscellaneous stuff- decals of different sorts that I thought might give the impression of something to be avoided.  Not enough to offset the attraction of a blooming flower or the transparency of the glass, obviously.  I need to make the window glass seem even more obvious than it does.

Many birds strike windows in the fall, when those from the northern forests, never having seen a window, encounter towns and cities full of them.  Young birds which have not before completed migration are perhaps the most susceptible.  It seems that the birds in my yard which are there year round don’t come near the windows, although the appearance of a predator can sometimes frighten them into scattering in all directions without regard to glass.

Cornell University (birds.cornell.edu <http://birds.cornell.edu> ), a leading bird research institution, indicates that each year 100 million birds probably die from window collisions.  Panes of glass are not found in nature, and birds apparently don’t distinguish between real and reflected landscapes.  There are a number of things that can be done to break up the reflective nature of glass- applying decals or tape easily seen by birds, hanging nets or other objects outside windows that are prone to bird strikes, even drawing designs on glass with special markers or bar soap.  Or placing branches just outside windows that make the birds notice and slow down.  A quick internet search reveals many ideas and products.  The American Bird Conservancy and Wisconsin Humane Society, as well as others, sell adhesive, frosted tape that reflects ultraviolet light that birds can see better than we can (we also carry this in our gift shop).

The important thing is to at least try to make an effort to reduce the number of birds hitting windows.  How ironic that we place windows in part so that we can see birds, but that they also are a threat to the bird’s welfare.  A little goldfinch, drab and common as they are and far from endangered, is still a living being whose life should not be wasted.