It is a beautiful, soft morning, with light wind, gray skies, and light snow falling.  Even though it’s January, it’s not terribly cold. There is open water on the Manitowoc River where it flows fast, and dozens of chickadees are already singing their courtship songs (sounds like a whistled “cheeseburger” call).  Winter is racing along – in a little more than a month it will be March.

To the south, the earth is waking up- wildflowers are blooming in Tennessee already, earlier than normal, and birds are either nesting in the southern US or becoming fidgety in anticipation of the coming migration.  Here we must wait for those signs of spring yet. We all know February and March can be tough months to weather sometimes.

As far as bird migration goes, we are planning for this year’s strategies to document the birds which either return to or pass over our Lakeshore area in and around our nature preserve.  We now use four different methods to do so: 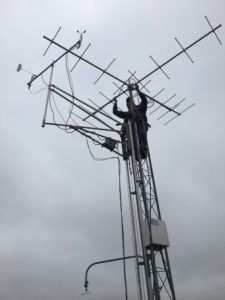 1. Point counts- our staff and volunteers (thank you, Darlene!) go to preselected places and for 10 minutes count every bird they see or hear.  These are done once per week during times of migration.
2. Traveling counts- preselected routes are walked and birds recorded. We do some of these at Woodland Dunes, and they are done daily by Charles Sontag at the Manitowoc lakefront.
3. Bird banding- probably the first activity at Woodland Dunes, tens of thousands of birds have been caught, banded, and released so that their movements and lifespans can be documented.
4. Telemetry- using the Motus system and antennae to detect radio-tagged birds.

Woodland Dunes is one of just a few facilities in the State to install a Motus detector, along with the Western Great Lakes Bird and Bat Observatory near Port Washington and some near Chequamegon Bay on Lake Superior.  Motus was developed in Canada by researchers who track movements of birds and bats and were looking for a way to do so that is less costly than some older methods.  Although there are only two in Wisconsin, there are hundreds of stations in Canada and the eastern United States.  For Motus, birds are caught in the same way we do during banding.  Small transmitters are placed on the bird in a way that doesn’t hinder their movement.  Transmitters have batteries which last anywhere from a few weeks to several months.  The bigger the transmitter “tag” the longer the battery life, but large tags are only suitable for large birds.  The smallest tags, however, can even be used for large insects like dragonflies and butterflies.  Some researchers use them to track bats, and one is proposing a study using tags to follow the movements of turtles within a nature preserve.  Even though the cost is lower than some other systems, tags are still about $300 each, which limits what places like Woodland Dunes can do.

The Motus array has two components- three antennas which are pointed so that they can record signals over a wide area, and a small computer which detects signals and stores the data.  It takes some technical expertise to set up the system and make sure the computer is talking to the antennas- I am grateful for the help of people who are much more skilled than I for set up.  Once deployed, the system passively listens for signals from the transmitters of tagged animals which pass by.  Our Motus unit was installed late last summer, at the start of the fall bird migration.  Recently, we went to recover data from the receiver, and found that three birds had been detected. 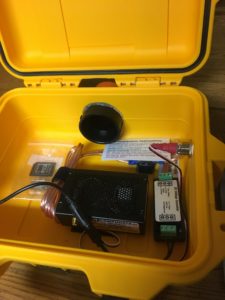 The first and second were both Swainson’s thrushes, which nest in the far north woods and which were both tagged in British Columbia!  We know that Swainson’s are abundant during migration here each fall, and follow the south edge of the Canadian forests eastward to the Great Lakes and then turn south.  Over the years, they have been the second most commonly banded bird in fall at Woodland Dunes.  Eventually, they move down to Central America for the winter- a journey of thousands of miles.  One of these was also detected in Saskatchewan on its way here.

The third bird was a Virgina rail, a fairly common but seldom seen bird of marshes.  This one was tagged in Ohio, and was detected at a number of different locations including the Bird and Bat Observatory in Port Washington.  With all that wandering, one wonders what the bird was looking for.

This is a critical time to research and try to understand birds. They are facing increasing challenges, and many are declining in numbers before we even understand why.  The corridor including Lake Michigan is an important migratory area, but there is still much that we need to learn.  Now that we’ve added telemetry to our bird monitoring activities, we are sure to develop a better understanding of the unseen travels of creatures all around us.  And use that knowledge to help them.