I remember looking out at the birdfeeder and seeing it crammed full of evening grosbeaks- large black and yellow finches with large bills. They reminded me of big wasps in a way.  They would show up in the coldest part of winter in flocks of dozens to hundreds of birds, chirping loudly.  Bernie Brouchoud used to band them here and in Manitowoc in the winter, and would have bird feeders made out of doors to accommodate all the birds.  At that time it was more common to see other winter finches- pine grosbeaks, redpolls, crossbills, and pine siskins.  We still see some of the latter species, but not as much- its been several years since we last saw redpolls, crossbills, or pine siskins at our feeders. 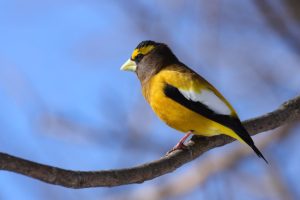 Between 1988 and 2006 Cornell University’s Project feederwatch documented a 50% decline in evening grosbeaks.  Recently, this was revised to an estimated 90% decline using the latest data.  And there are four other species that have experienced declines from 86% to 89%, including the bank swallow, which nests around here.

Recently there’s been news about the recovery of bald eagles- nearly 1,700 nests are known in Wisconsin in 71 of 72 counties. In their case removing one pesticide from the environment helped that species recover. In the cases of the birds listed above, the causes of their declines are not so obvious. For evening grosbeaks, there may be a number of factors involved. The American Bird Conservancy lists destruction of large areas of habitat in Canada, changes in tree populations, and a warming climate (which might make life more difficult for birds of the far north).  Believe it or not, evening grosbeaks benefit from boxelder trees – the females of which produce loads of seeds.  As our forests mature, boxelders thin out of the forest.  In Canada, spruce budworms are an important food source, but at the same time a major pest of coniferous trees such as spruces.  People spray large areas to kill them, which harms birds and reduces their food source, something that has been surmised for other species of that habitat as well.

A bird that nests around here that unfortunately made the list is the bank swallow.  These small brown and white birds nest in holes they excavate in the sides of sand or mud banks or mounds.  They are also susceptible to disturbances in those areas during nesting season and to pesticides which contaminate the insects they feed on.

I wish that helping nature was simple, but doing so is as complex as taking care of your own health.  There’s no one thing that we can do to manage everything that can go wrong with our own bodies. We have to eat in a healthy way, exercise, avoid excessive chemicals… a lot of different strategies.  I hope that we can determine the right mix of actions before we lose some of these beautiful birds completely.