Last December, as I was crossing the yard at the nature center I heard an unusual bird song.  It came from a small songbird perched near the top of an ash tree west of the barn, overlooking a brushy area.  After retrieving binoculars from my car, I could see that the bird was gray with dark wings and a long tail- a shrike.  Later, another showed up in the neighborhood in which I live. 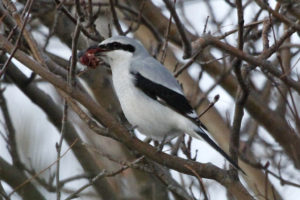 The fact that the song was so unusual is not surprise- although shrikes visit our area in winter, there are never very many of them around.

Shrikes are very interesting birds in that they’re called predatory songbirds.  They feed on mice and voles, small songbirds, and large insects.  They are intelligent enough to plan ahead when it comes to ensuring a constant food supply- when prey is abundant they catch more than they need at the moment, and store the excess for later.  They do this by impaling the bodies of their victims on thorns or even barbed wire, hanging them as if in a miniature old-time butcher shop.  For that they were given the nickname “butcher bird.”  Unfortunately, to some the term implied that the birds were somehow overly vicious, but that is hardly the case.  In reality, many birds are omnivores and incorporate other animals into their diets.  Robins eat many invertebrates when they are available, and I wouldn’t want to be a caterpillar on a branch where a chickadee had landed.  My favorite representation of this was in the movie “A Bugs Life,” where, to the insects who were the main characters of the story, a cute, fuzzy canary was what they feared most.

There are actually two species of shrike that can be found in Wisconsin and which are nearly identical in appearance – the loggerhead shrike, which is rarely present in summer and sometimes nests here, and the northern shrike which migrates south to our area in winter.  The northern is the only one seen in winter and is much more common.  It nests far to the north, in the spruce forests and even arctic tundra.  It makes a very deep cup-shaped nest in which it lays a half dozen grayish to greenish splotchy brown eggs.  Much of their nesting area in Canada and Alaska has been protected, and even though they are not common birds here in winter, their population appears to be stable for now- a warming climate may change habitat in the hooknorth.

Shrikes lack the talons of the hawks and owls.  Their feet are like those of other songbirds, and they don’t rely on them to grasp and suffocate prey as do the raptors.  Rather, shrikes pursue and hit their prey with their sharp hooked bills.  They knock prey to the ground, then use their bills to sever the spine of their victims behind the head. I have never caught and banded a shrike, but I am told that they can deliver an especially nasty bite to the hand of a bander.

Its hard to think of Wisconsin as a place to go to spend the winter, but shrikes and some other birds do exactly that.  Unlike some of the owls which are forced here during certain years when food is scarce, shrikes and other predators like the rough-legged hawk are regular visitors from the Arctic and may be better adapted to the long migration.  They provide unexpected surprises for birdwatchers, and unexpected drama around bird feeders at times as they pursue small birds.  Like many of the 300 or so species of birds found in our Lakeshore area, they lend variety to the experience of observing nature, and elevate our quality of life.