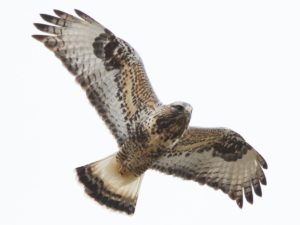 As February advances we are treated to some interesting birds seen, or at least noticed, out in the expanses of fields in the country.  These are not the typical birds which visit our feeders and become our outdoor companions of the winter- rather they are wild and in need of large areas of open country in which to hunt or glean seeds.  Some visit the open areas of the preserve at Woodland Dunes, especially the prairie and wetland areas along Woodland Drive, but most often I notice them along the highway on my drives to and from the Nature Center.  They make the commute, even though it is not long, all the more interesting.

I wrote about northern shrikes recently- they can be seen perched up high in a tree or on a power line, scanning for prey.  They are one of the birds that at first glance might resemble a mourning dove, which also likes to perch on lines, and they too have a long tail.  A shrike’s head is larger and more compact, and a closer look reveals black wings and facial mask, contrasting with a light gray body.  They nest in the very far north, and soon will be leaving our area for the tundra they call home.

A second dove-like species is the American kestrel, our smallest falcon.  They are colorful birds with long tails, and like shrikes, will perch high on power lines from which to scan for meadow voles.  We have kestrels here year-round. In the summer they nest in hollow trees or old buildings and supplement their diet of voles with insects and even small birds.  Overall, though, their numbers have been declining and people are researching why this might be.

We see more red-tailed hawks in open areas in the winter.  Although they nest here they also migrate to this area in winter from harsher places up north.  They are large hawks with white breasts often seen perched near but not at the top of large trees.  Like shrikes and kestrels, they are looking for meadow voles, which can be abundant and are exposed during winters when snow cover is scarce.

As if the voles haven’t had enough hazards from the hawks described above, in winter we also see another arctic species, the rough-legged hawk.  Rough-legs are as large as red-tailed hawks, but are variable in color, from very dark to light with two distinct patches on the undersides of their wings near what we would think of as “elbows”.  They feed on voles and lemmings in the summer arctic, and come here to enjoy our balmy winters (they are well adapted to cold down to the extra feathering on their legs to help retain warmth).  Unlike the lighter-colored red-tails, rough-legs tend to perch in the very tops of trees rather than partway down.  They are found in tundra around the world- North America, Europe, and Asia.

Smaller songbirds include snow-buntings, which are very light-colored in winter and flash white when they fly.  They gather on the ground in sometimes large flocks of hundreds of birds looking for weed seeds and waste grain, and are nomads- they often turn up unexpectedly one day and are gone the next.

And then, one of my favorite songbirds- the horned larks.  To me they are the first real sign of spring, pairs showing up on the gravelly shoulders of roadways in February.  They begin courting soon after they show up, and utter the most delightful tinkling song over the fields.  By the time things thaw they are nesting, right on the ground and the females are sometimes covered with snow as they incubate their eggs.  I always admire their hardiness and persistence, and the effort they put forth in raising their next generation.

There are others- snowy owls and Lapland longspurs and other hardy open-country winter birds, but they are not as frequent or regular here in winter.  But, as is typical of nature, one is never sure what one will find outdoors.