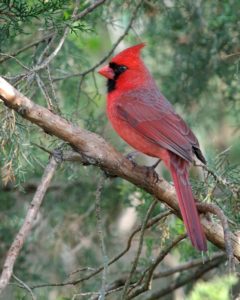 Nothing changes the appearance of our world as quickly as snow.  The gray and brown highlights of just a week ago are buried in white and the frozen surface of the soil is softened.  That the world is blanketed is a good way to describe it- now the ground is insulated and protected from freezing deeper.  Untold millions of gallons of water are stored, to be released in spring or at least the next thaw.  We tend to be petty, thinking mainly about our own convenience and not wanting to shovel or slow down when we drive, but from my perspective snow opens a world of animal tracks and snowshoes and a snow hanging on the boughs of trees, decorating them in celebration of a new season.
Birds look different against the white background too.  Some are cryptically colored, like sparrow and juncos and chickadees, which blend in among the white and gray.  Others seem become even more colorful- cardinals being an example of that.  The seem to be a favorite of people who feed birds, and indeed their colors seem to pop when snow is on the ground.
Often people ask what has happened to the cardinals – that they aren’t been seen lately, especially when the winter is mild and ground bare.  They are still around, but don’t need to gather at feeders as much as other wild food is often abundant.  Add six inches of snow and there they are, back at the feeders.  Like most birds they are good at either remembering where feeders are, or recognizing them.
If one looks at old records, one won’t find mention of cardinals around here before the 1940’s – they didn’t live in this region.  They are a southern bird which has slowly been making its way north, and are now a familiar part of our permanent birdlife.  They are continuing to extend their range northward, as are other southern species like the tufted titmouse and Carolina chickadee, which are almost certainly responding to a warming climate.  Their range is now from northern Wisconsin to Central America.
In addition to warming climate, northern cardinals (Cardinalis cardinalis) also benefit from the ways people have changed the land.  They prefer open woodlands and shrubby areas rather than mature forests, and are very much at home in suburban areas.  They build a nest of twigs not far off the ground, and aggressively defend their territories.  It is not uncommon for both male and female cardinals to challenge their own reflections in windows, probably thinking they are rivals.  This can last for several weeks, until levels of reproductive hormones subside.  Also, both male and female cardinals sing, one of the few species to do that.
Young cardinals look like females, although they lack the black mask.  Eventually young males begin to molt and are a blotchy red in fall, but by winter are all red.  Females remain an olive-tan color year round.  I believe the adult males molt in fall also, so they are at the reddest in the winter.  Their are subtle variations in hue, however, with some males being  deeper red than other.  This may be due to a combination of age (mature adults being deeper red) and diet (the berries of some plants, especially invasive honeysuckle, has been known to influence the color of feathers).  In the last couple of years, yellow cardinals have been found in a couple of locations.
Cardinals are place in the same family as the also brightly colored tanagers.  There are a couple of differences, the cardinals sporting their distinctive crests, and also their massive beaks which make opening large, hard seeds easier.  They can use those with considerable force, applying that to either seeds or the hands of unwary bird banders!
It is not uncommon to see six or more cardinals at the feeders at Woodland Dunes at a time when there is snow on the ground.  They do well in the brush habitat around our headquarters, and in late summer and fall just as many fledglings as adults visit.  Even though they are a common bird, they add much to the winter landscape and give us something to look forward to seeing during the coldest of days.