↓
Home Menu ↓
Skip to primary content
Skip to secondary content
As I write this, rain is again beating on the nature center windows, and the driveway has turned to ice.  Bins of snowshoes are waiting to be used, but it appears that they will remain boxed up for the time being.  Once again, we are experiencing a different kind of winter than the ones I grew up with. 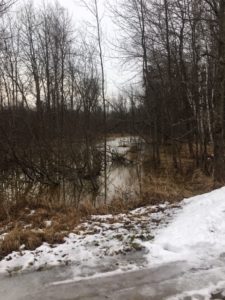 Not that it’s all bad from the perspective of comfort.
I have vivid memories of some very cold winters of a friend and I traveling up to Three Lakes when it was more than 30 below in a car that didn’t want to run well in that cold.  And taking all weekend for the fireplace to heat up the cabin we stayed in.  Or really cold nights in the late ’70s when I parked my old Rambler close to the barn to cut the wind, a light bulb keeping the battery warm in hopes it would start so I could get to class at UW-Manitowoc.  Or the winter of ’83-’84 when there were days with highs of -15 degrees and many cars just seemed to give up until it got warmer.
Back in those days our growing zone was 4, based on coldest minimum temperature.  Now, we’re zone 5 here.  A lot more of our winter doesn’t have snow now- in fact 61 percent of weather stations in Wisconsin show less snow than in the past.
So what are the consequences?  Well, the amount of energy we use is probably less, at least for heating.  We are probably spending more time tending our roads for ice now than snow.  People are doing more walking than skiing or snowshoeing around here, and one often has to travel far to use a snowmobile.  We used to have a local hill for downhill skiing.  Runoff occurs much of the year now, instead of in spring. It used to be that the snow would lock up water to be slowly released into the soil at the end of winter.
Out west, that rapid year-round release of water can be devastating.  Where snow in western mountains used to slowly melt and keep soil moist until July, now if it melts earlier it leaves the soil dry at the hottest time of year, with areas susceptible to wildfire.  Without the slow snowmelt streams are warmer and fish have to migrate further upstream to find colder water.
I am not sure about the impact on our wildlife of these wet winters yet, but I do know that cold water conducts heat far more rapidly than does cold air.  There are many animals in our preserve that spend the winter sleeping in the leaves instead of hibernating in dens as we imagine them, snug in a frozen world.  Insects, frogs, salamanders, even bats sometimes just bury themselves in the leaves, and one wonders what the effects of all this cold water and ice will be.  The swales, or long narrow wetlands between our old beach ridges in the preserve have much more water than is typical for the middle of winter.  We know that in livestock there has been research into the Effective Ambient Temperature in animals- affected by actual temperature, heat conduction, humidity, and precipitation.  Water displaces air in an animals’ fur or feathers, air which helps provide insulation, and the animal needs to compensate somehow for the heat loss.  I am not sure about how the cold, wet weather we see now compares to the extremely cold, dry winters of my youth. I remember finding frozen dead birds near our feeders in those days, mostly non-native house sparrows.  I have a suspicion, though, that these wet winters are nearly as tough for wildlife.
Well, they say there’s nothing you can do about the weather, but the weather has changed from what it used to be.  All of our recent years have been among the warmest on record, and this year will probably also be.  We may have already caused it.  As the natural world attempts to adapt to the new winter reality we are perhaps left to figure out how put put this cat back in its bag.
photo- water-filled swale in the forest at Woodland Dunes this week.