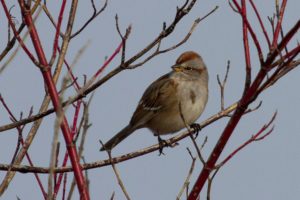 Another interesting winter seems to be upon us.  The cold came on suddenly but without snow. December seemed to put a fitting cap on perhaps the wettest year on record with some generous rains.  Our January started with rain then some delightful snow which brought birds back to the feeders and freshened up the landscape.  Being snow lovers, our staff is hoping for more for snowshoers and others who thrive in the frosty forest.  The forecast in the near term would seem to indicate that we will be disappointed.
The Christmas Bird Counts have been completed for Manitowoc County, with dozens of volunteers participating.  It wasn’t an unusual year for the counts, although some migrants haven’t felt the need to move south and a few southern birds are here where they aren’t usually.
At Woodland Dunes the count day was rainy and dark.  There was some open water out on the West Twin, so there were ducks and geese present- Canadas. There were also mallards, and common mergansers.  Downstream where the river was slightly more frozen, there were four bald eagles arguing over a carcass on or in the ice, all of them immatures.  One more adult eagle was found along Woodland Drive. We’ve never seen five eagles on a Christmas count here before.  The combination of open water and little snow makes finding food easy for eagles, so why migrate farther south?
On the Manitowoc Count there were lots of ducks and geese including a wood duck and hooded merganser, and kingfishers along the river at a couple places.  There were also a flicker and three pileated woodpeckers.  And nine harriers – a lot for that species in winter. There were also a number of pine siskins, winter finches from the north to be found this year.
In the northern part of the County, three species of owl were found: great-horned, screech, and barred.  There were several golden-crowned kinglets, lots of red-tailed hawks, and some snow buntings.  In all of the count areas, numbers of wild turkeys were down compared to average as were numbers of many of the sparrows, but with little or no snow cover those kinds of birds, well camouflaged as they are, can be hard to spot.
An interesting southern bird which did not make the count but was seen recently is the Carolina wren – a large member of it’s kind which shows up sometimes in fall and stays into the winter.  They have been reported from at least two different locations in the County.  That they have been seen is not surprising – I expect our mild winters now will encourage more to hang around here.
Bob Domagalski volunteers to coordinate the four counts that occur in Manitowoc County and dozens of volunteers from both our area and other parts of the State help.  The Christmas Bird Counts began as an alternative to indiscriminate “side hunts” more than 100 years ago and are now conducted all around the world from mid-December until the beginning of January, with counting efforts focused on 15 mile diameter circles which are consistent from year to year.  It is the oldest and largest citizen-science project there is. Over the years gives us an understanding of how bird populations in winter are changing over time.  It is hard to imagine the millions of hours volunteers contribute to this effort, or how important this information will be in the long run.
So while many of us enjoy birds, the efforts of these people help us understand them so that they can continue to exist.  In an ever-changing world, such understanding is so important, especially if we want to continue to see the birds we value so much.
photo- American Tree Sparrow, a winter bird of Woodland Dunes