Here along Lake Michigan, it seems that every season has its own unique qualities in terms of weather.  No two years seem to be the same, and within each season there are often significantly contrasting periods.  As we all know, wind direction alone can cause marked changes in temperatures, but there are larger and broader factors that come into play.

Its safe to say that the first half of our winter has been mild.  Even though it still feels cold, we have not been as cold as our 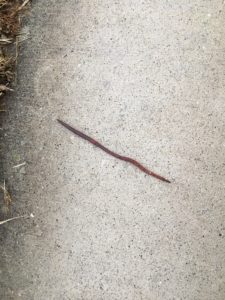 average temperatures typically reflect.  The National Weather Service collects and analyzes data for certain locations, and they indicate that this winter has been significantly mild- the December average temperature was 6.6 degrees above normal, and so far for January it has been about 3 degrees warmer on average.  Again, it may not seem noticeable to us, but it can have a profound effect on wildlife.

For example, the soil was still not frozen until Christmas Eve – on December 23 not only was the ground still thawed, but an earthworm was seen on the sidewalk at the nature center.  A few sandhill cranes, which typically withdraw from our area about December 1st, are still being seen nearby.  Some diving ducks, which migrate through in November, have still been recently seen along the lakefront.  And just a few days ago we received a call from a neighbor who observed a garter snake sunning itself on the top of the snow.  The rare bird sightings list from Cornell Universities’ eBird database, has many unusual southern birds lingering around- a Baltimore oriole is being seen near Wausau, a number of warblers and other migrants are being found in locations across the State.  This makes for an interesting season for nature spotters, enhanced by the more comfortable temperatures we are experiencing.

In the face of our lingering Covid-19 situation, we are benefitting from the more pleasant temperatures.  At Woodland Dunes, our intrepid squad of interns have spent their winter college break slaying invasive shrubbery in the preserve – something that would not be possible in normal January temperatures.  There can, however, be a downside to a mild winter.

The cold season helps to keep certain populations in check, acting as a sort of disinfecting agent.  There are a lot of unwanted and invasive species to our south, and our cold winters help keep them in check.  Without severe cold, the emerald ash borer is more likely to survive and kill even more ash trees next year.  Japanese beetles and the brown-marmorated stink bug are also able to survive, along with the Asian multicolored lady beetles which already winter in my old farmhouse, as well as the aphids they feed on.  Some insects also carry plant diseases with them, and if the insects survive in greater numbers there is an increased risk of disease transmittal in spring.

Sooner or later, I’m sure we’ll have a harsher taste of winter.  But while that may be uncomfortable to us humans, it is not necessarily a bad thing.  As in other aspects of our lives right now, we should appreciate what is “normal” for the good that it can provide us.

photo- a lowly earthworm, one of the first signs of spring- in December!