Every winter, I look forward to snowshoeing, sledding and hearing the crunch of the snow under my feet. There’s something 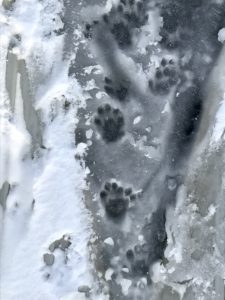 magical about walking in the snow at night or cruising down a hill in a sled that makes me feel like a kid again. Humans aren’t the only creatures that play in the snow, and I was recently reminded of this when I saw river otter sign at the end of the Cattail Trail.

River otters are native to Wisconsin and live in rivers, streams and larger lakes. They belong to the mustelid family, a group of carnivorous mammals that includes weasels, badgers, fishers and others. River otters spend much of their time in the water and have long, cylindrical bodies, dense fur and webbed feet. On average they weigh between 15-19 pounds and are 3-4 feet in length. They are easy to identify by their long, thick tail which is tapered at the tip. The tail is very muscular and helps the otter dive to depths of 36 feet or more and swim up to 8 miles per hour. They dine on suckers, catfish, small mammals, snakes, crayfish, frogs and insects.

River otters have an interesting reproductive strategy. They mate in March and April, shortly after the female births her annual litter, but the females are able to put their pregnancy on hold. This is called delayed implantation or embryonic diapause and means the eggs are fertilized, but do not implant in the uterine wall for up to one year! The female doesn’t actually have control over this, it’s a physiological response to environmental cues. Waiting until her current young are weaned and conditions are prime, gives the female and her future litter the best chance of surviving. About 100 other animals experience delayed implantation including beavers, bears and armadillos.

Before giving birth, the female prepares a den in the bank of a stream or uses an old beaver lodge or muskrat home. In March or April, she gives birth to two to five helpless, blind pups. They grow quickly and emerge from the den when they are about 2 months old. The female teaches her young to swim by carrying, dragging or enticing them with food. They stay together as a family through the first winter, then the young disperse and find their own territories. 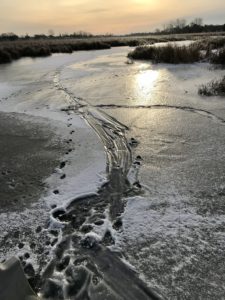 As I eluded to before, otters are known as playful animals and learn through play. It’s an important component of an otter’s life and is a way of strengthening social bonds, improving hunting skills and scent marking territories. They wrestle, chase and play capture and release with live prey. They have even been observed swimming in circles to create a whirlpool, which pulls up fish from the bottom of the river. Otters spend a large portion of each day scent marking territory by urinating, defecating, scratching and rubbing their scent glands on rocks and trees. They also roll around and flatten plants in specific areas and to leave their musky odor behind. Otters also seem to enjoy playing in mud or snow, quickly bounding, then sliding on their bellies. You can look for otter tracks and belly slides on the ice and snow on area rivers.

I think humans could take a lesson from river otters and focus more on play. Maybe this could be a fun and refreshing New Year’s resolution? Sledding anyone?