As I write this it is another gray, windy day with waves pounding the shore along Memorial Drive and lakeshore flood warnings are in effect. With lake levels so high, it doesn’t take much for such warnings to be issued. The wind seems to be stronger than it used to be, but I can never be sure my memory is accurate. 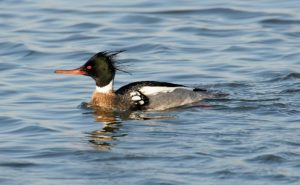 The average wind speed in Wisconsin is 12 mph. It can vary considerably across the state – today it ranges from 3 mph in the west-central part of the state, to 23 mph in our own back yard.  That we are close to Lake Michigan, where wind can flow unimpeded, I’m sure contributes to velocities we see here.

What causes wind? Basically, the sun.  Or the sun’s heating of the atmosphere, and water vapor that is evaporated and becomes a part of the air column. As a result of that, high and low pressure systems develop. Air flows from high to low pressure areas.  The greater the difference between the pressures determines how fast the air moves, or how much wind is generated between the two. Lately, we’ve had some big storms in terms of that air pressure change – deep low pressure systems with a lot of wind every few days, sometimes developing in a very short time. We like to give those dramatic names like Polar Vortex or Bomb Cyclone- I don’t remember hearing those terms years ago.

Whatever the name, the wind affects many aspects of the outdoors.  Birds migrate according to the wind direction and speed, sometimes riding the wind to very unusual places. Water on the ground evaporates faster. Lakeshore sand, cobbles, and even rocks are moved around, as is algae in shallow water. Trees in the forest come down, or are pruned by the wind.  At the Nature Center, we avoid taking groups into the woods when the wind is greater than 20 mph for safety reasons. For the voyageurs who traveled along the shore by canoe, strong winds meant a layover until wind subsided – probably a much needed rest. Strong west winds still cause freighters on the Lake to seek shelter of the broad bay between Two Rivers and Manitowoc.

Among the most exposed wildlife are the diving ducks in the harbors and out on the Lake. I am amazed at their ability to withstand the cold and waves during winter storms. They move outward to avoid the breaking surf but are still subjected to wind, cold air and water, and large waves. They are well adapted to this part of their lives, with oiled feathers to shed water, extra down feathers to stay warm, and reduced blood flow to their legs and feet to avoid too much heat loss to the water. They have millions of years of adaptation to this life, and if they are able to stay in good condition can handle some really challenging conditions, as long as the water is open. Ice presents a different, and more severe problem for them, but that’s not the subject here.

Sometimes we experience wind without the rain or snow that storms bring – the precipitation is often not far away but not right on top of us. And sometimes the wind precedes the storm by several days. Our former Director, Bernie Brouchoud, used to say that storms would persist for the same length as the east winds that came before them. Whatever the duration, when I step out and experience the chill of the wind, I’m happy not to be one of those little ducks experiencing it full force out on the icy water.