October.  The world is suddenly cool and colorful.  And alive with birds from the north passing through,  insects galore, and bursts of new wildflower blooms.

I stole away one morning last week to walk a short loop on Willow Trail, one of the best areas in our preserve for migrating 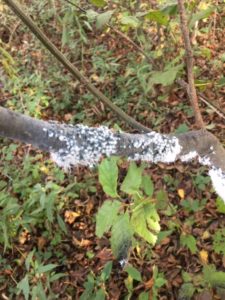 songbirds, to see what the previous night brought us. It was a partly cloudy and breezy day, but not too cold. The trail was lined with white and purple asters, the dogwoods still held their now mottled leaves, and the willows and cottonwoods were as green as  summer.  The poor ash trees, however, were dropping their yellowed leaves like snow flurries- they always seem to be the first to give up in the fall.

In the wetter areas there were alder stems of various diameters, some of which had clusters of white fuzz.  It looked like they were moldy, but in fact they were supporting colonies of wooly alder aphids- small insects which huddle together and feed on alder sap. They are present through much of summer, but when leaves begin to drop they become more obvious to the casual hiker. In fact, their contrasting color and appearance can be at first glance gross and alarming, perhaps more than they need to be.

Wooly alder aphids are fascinating bugs.  Their “wool” is actually a waxy substance which makes them look fuzzy and actually helps them to float on the breeze when they want to move to another plant. They need two host plants- silver maples on which to lay eggs and feed, and later alders. When on alders the females pop out clones of themselves without needing any sexual means of reproduction. At a certain point, males are needed, produced, and eggs are laid in a more conventional way.  When they are stressed, such as when freezing temperatures occur, they produce winged males and females who fly to the safety of a maple tree to lay eggs.

The aphids feed on sap, both to obtain sugars and nitrogen with which they build proteins, and alders have a special relationship with bacteria which allows them to draw nitrogen from the atmosphere. The aphids must consume a lot of sap to get enough nitrogen, so much that they excrete some of the excess sap in the form of honeydew, a mixture of sugary juice and aphid poop. Other insects like ants feed on the honeydew and actually shepherd the aphids in little wooly flocks on the alders.

The adult aphids probably die during the winter, but their eggs survive to ensure that another generation of wooly aphids, or fairy flies or fluff bugs as they’re sometimes called, will intrigue us next year. It’s almost guaranteed, as one researcher estimated, that if there were no predation or disturbance, a female could produce 6 billion offspring during the course of a year! There is predation to keep the aphid numbers under control, and they don’t do permanent damage to the trees.

Sometimes the smallest creatures are some of the most interesting, even if they are very different from us.


Photo – wooly aphids on an alder by Jim Knickelbine