↓
Home Menu ↓
Skip to primary content
Skip to secondary content
As October wanes, animals are faced with several choices.  Well, not really choices, because they are determined by biology 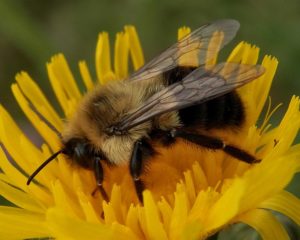 honed over millions of years.
There are two types of dormancy in living things- prescriptive, in which an organism enters dormancy before conditions become too difficult for survival, and consequential, in which an organism enters dormancy after conditions become too difficult to survive under normal means.
On the asters along our driveway, some of the last blooms of the season, a few worker bumblebees forage on sunny days, along with some gynes, next year’s queens.  The worker’s days are few now- they won’t survive the winter.  The gynes, however, go through diapause, during which their life cycles are suspended. They will spend winter in an old rodent burrow waiting for spring.
There are fewer and fewer frogs now, where once they had been so abundant.  In the parking lot, a snapping turtle crawls determinedly toward a pond.  Both are seeking a place to undergo brumation, during which reptiles and amphibians experience lower body temperatures either on land or in the water.  Some frogs, such as tree frogs, wood frogs, chorus frogs, and spring peepers, either freeze or nearly freeze, their cells protected from bursting by glycogen which they draw from their livers.
Some animals hibernate, lowering their normally warm body temperature to temperatures which allow them to burn less fat and sleep right through winter. Bears and ground squirrels are hibernators. Others partially hibernate – lowering body temperature but still eating occasionally, like chipmunks.  Even feisty little chickadees and other birds can lower their body temperatures at night and shiver throughout the day and night when it gets cold.
Trees become dormant, although that is as much caused by the desiccation of dry winter air as it is from the cold.
In addition to plants, other organisms such as bacteria and viruses have their own ways of going dormant- actually sometimes viruses cause bacteria to become dormant.
So creatures of all sizes have widely different methods for coping with the oncoming season.  That they are so different is remarkable and is a testament to their abilities to adapt to the many different scenarios which they must face.
photo- wikimedia