Earlier this summer, I had the pleasure of leading a family twilight program. Two families participated in the program and it was the first time most of them had walked a trail in the dark, including the parents.

After a brief introduction, we started down the trail. The kids were buzzing with excitement and perhaps a little nervousness too. Any nearby animals were surely alerted to our presence. However, after a few minutes, everyone quieted down and started using their senses to take in the evening.

We stopped in the prairie and listened with our “deer ears,” by cupping our hands behind our ears. The kids were able to pick up faint cricket sounds as well as soft call notes of songbirds they weren’t able to hear before.

Being in an open space, our eyes naturally gravitated to the evening sky. One of the older boys found the Big Dipper and proudly pointed it out to the rest of the group. We stood for a few minutes, in awe of the great number of stars we could see. One child noted he doesn’t see as many stars at his house in town. One of the youngest boys and I both had the good fortune of seeing a shooting star. He was very excited because it was the first one he had seen. 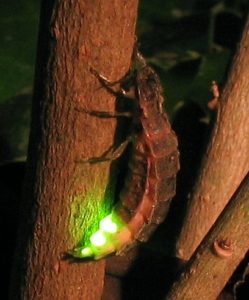 We then turned down the trail and headed back in the woods. We noted how dark it was and how difficult it was to see anything, except for outlines of the trees. As we slowly walked along, feeling the ground through our shoes, one of the kids saw something glowing along the side of the trail. We all stopped to watch, and sure enough, there was something small, glowing in the plants.

Once everyone had a good look, I used a small flashlight to investigate. To my delight, it was a firefly larva! I gently picked it up and showed everyone the strange, armored-looking creature. I explained firefly eggs hatch into larva that live in the ground. They are carnivores, eating snails, worms and other small invertebrates. Adult fireflies are famous for their spectacular light shows, but the eggs and larva of some species also glow. This is possible through a chemical reaction called bioluminescence. I set the firefly larva back where it was found and as we continued on, we saw dozens of them scattered on the ground! What a treat!

Back at the Nature Center, I asked everyone to share something they learned or share their favorite part of the program. One child said, “I never knew firefly babies could glow!” Other highlights mentioned were the shooting star, the bright starry sky and the chance for each child to briefly lead the group in the dark. It was a night of many firsts and something I think we will all remember for quite some time.