We staff at Woodland Dunes see our place in the world as a haven for both wildlife and people. Each year we spend some time trying to measure the diversity of wild things that call our nature preserve home, and try as best we can to foster an appreciation for that wildlife among the people who visit the nature center and preserve. And also an appreciation for the good that being out and a part of nature does for them both physically and emotionally. Caring for nature is not a one-way street.  Just like the benefits we reap when we care for and are kind to each other, we are the better for caring for the wild things which share the world with us. Unless of course they are the invasive kind which bully their fellow animals and plants. 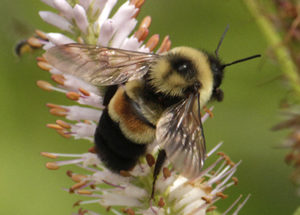 Each year it seems that there are more opportunities to survey wildlife. Citizen-science is a growing field in which people who aren’t professional scientists with an academic specialty can still contribute wildlife observations in a meaningful way, especially with a little training. Our staff falls into that category as we survey birds, bats, bumblebees, and other wildlife.  We are knowledgeable people, but not experts in any one field. Fortunately, because Woodland Dunes is a special place in terms of wildlife habitat, we are visited by people who truly are experts in their fields, and those visits often reinforce the importance of what we do.

Two such visits happened recently in late summer. The first involved a brief survey conducted by an entomologist from the Wisconsin DNR, who visited some of the meadows here to look for bumblebees. In all, he found eight species – including one federally endangered, the rusty-patched bumblebee.  The rusty-patched is a formerly common bee species, and we’re in the middle of it’s range. Unfortunately, due to a number of factors brought on by changes in habitat and others, this bumblebee has declined significantly, nearly to the point of non-existence. In the last several years, however, this species has been found in two different locations on the Woodland Dunes preserve in areas where native wildflowers and grasses have been planted.

A few weeks ago, we were informed by a botanist working for a consultant on one of our habitat restoration projects that he had noticed a small wildflower blooming near one of the wooded trails – a forked aster.  Most people wouldn’t think twice about this low-growing plant blooming in September in the woods, with it’s loose daisy-like lavender blooms, but to those who are familiar realize it is a threatened plant in Wisconsin.  It is found in forests dominated by hardwood trees, often on the shores of lake or streams. It is often found near oaks, boxelder, ash, and popple trees.

These two species are important to us in a number of ways. They are among the last of their kind – that in itself makes them special. They represent the wildness that Woodland Dunes hopes to preserve, and the fact that they have found this place underscores the value of high-quality natural areas as refuges for life that faces so many challenges in places that have been unthinkingly disturbed or damaged.  So, when you visit Woodland Dunes, it might give your visit added meaning to know that these little plants and animals which are so easily overlooked are here and hanging on to life along with hundreds of others which share this very special place.