As fall progresses the landscape changes, and even though we’ve been through this cycle many times (some of us more than others), the changes still seem remarkable.  On Cattail Trail at the nature center, the vegetation is rich with color, and filled with small birds quietly moving among the dogwoods just occasionally uttering a peep- called a call note- instead of their typical songs.  It’s a challenge to learn the full songs, and identifying birds by their call notes alone can be described as an art.

The later warblers are in- palms and yellow-rumped (also called “butter-butts”), swamp and white-throated and white-crowned sparrows, Swainson’s thrushes, and many others.  The towhees that nested near Willow Trail are still around, as are many gray catbirds.  All seem to be feasting on white dogwood berries and wild grapes, trying to store enough energy to complete the next stop in their migratory journey.  One wonders how 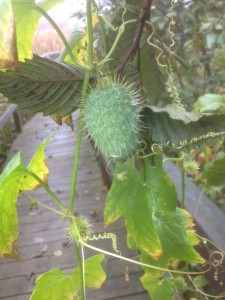 many tons of fruit these shrubs produce just so that the birds will help them distribute their seeds.

Among the colorful shrubs are vines like the grape, Virginia creeper, and a strange looking plant that seems to appear out of nowhere in late summer.  It’s stem is flimsy with grape-like tendrils, and leaves which are lobed like a maple, but also looking a little bit like those of a small pumpkin.  The fruit is the giveaway- a weird, spiny, fleshy, oblong object about the size of a golf ball- the fruit of the wild cucumber.

In August, the annual vines seem to explode with growth, wrapping shrubs and small trees with a net of foliage.  Next large clusters of very small white flowers are seemingly sprayed across the vines, to be followed several weeks later by the strange fruit.  People often ask if this is an invasive plant that will harm trees- the answer is: not really.  Our wild cucumber, Echinocystis lobata is an annual vine in the gourd/cucumber family that is native to eastern North America and Canada.   Echino means “like a hedgehog”, and cystis means “bladder”, referring to the spiky fruit.   There is another plant, Marah, from the same family native to the southwest that goes by the same common name but is perennial.  As it is not woody, it doesn’t permanently attach to its supporting tree or shrub, and the annual vines decompose in a few months.

The flower clusters emit a pleasant scent, no doubt to attract insect pollinators.  Although there are many flowers in a cluster, most of them are male (producing pollen)  with only a single female flower in each bunch.  This explains the relatively few fruits that are produced in proportion to the number of flowers, and because the plant attracts insect pollinators, the pollen grains may be too large to cause the kinds of allergy problems that small, airborne pollens produce (like those of ragweed).

As fall continues, the bottoms of the fruits open up and several seeds, resembling those of watermelons, fall out, or rather, are ejected.  The seeds overwinter on the frozen ground waiting for spring to sprout and begin their life cycle anew unless they are eaten by a bird or rodent.

Look for wild cucumbers now growing along streams or in wet soil.  Like so many plants, they add a different texture and appearance to our natural landscapes.