For more than a month there has been a special guest on our back porch next to the door.  She has made a home using the table, wall, and folded deck umbrella as supports, and during the day hides within 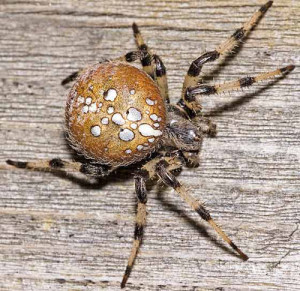 the umbrella’s folds of fabric.  At night, though, she creeps out to wait in her cinnamon splendor beneath the porch light for careless moths.  She’s a large shamrock spider, one of the many interesting invertebrates that are found here in late summer and fall.  With her fat body measuring an inch in length not counting her legs, she commands attention and startled me on many occasions as I opened the door.

As the goldenrods and asters show off their fall colors, a close examination reveals that their bright hues are not aimed at people, but at much smaller and more numerous creatures.  On those blooms are 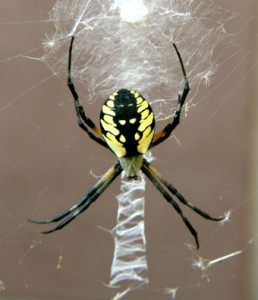 many species of insects- native bumblebees and smaller species like mason and miner bees, non-native honeybees, wasps, bugs, beetles, butterflies, moths and flies.  The flowers are abundant, and produce loads of pollen so heavy that it is not distributed in the air (and doesn’t contribute to hay fever) but rather relies on insects to carry it from plant to plant.  And with an abundance of insects naturally comes an abundance of their predators- birds, spiders, other insects- needing to take advantage of this significant food source.

Outdoors, there are five species of spiders that are usually abundant and easily noticed this time of year.  Four of them are orb weavers- the reddish shamrock spider, black and yellow and banded argiopes, which are usually found among fields of wildflowers.  In spiders, the females are typically larger than males, do most of the predation, lay and sometimes care for the eggs.  Shamrock spiders are reddish or orange (why not green?), while black and yellow argiopes are true to their name- large black and yellow spiders.  Banded argiopes are whitish on the upper side of their abdomens with horizontal yellow and black stripes and are not quite as bulky as the others.  All of these spiders are large (a cm or more) and spend their time hanging out (in their webs) waiting for insects.  They are not aggressive, and often drop to the ground to hide when approached.  After walking through fields this time of year, I have a number of times found them hitchhiking a ride on me after I stumbled through their webs- an experience which elicits a very excited reaction even though I know they are harmless.

Barn spiders are gray in color and are also round and bulky.  Appropriately named, they like to live under the eaves of buildings, and surprise many a house painter who is working this time of year.  They probably benefit from the structures we humans have made, and certainly do no harm even though they don’t pay rent for the space they use.  The same is true for long-bodied cellar spiders which hang from random cobwebs in the corners of our houses.  They too reach the peak of their population this time of year inside our dwellings, to the concern of anyone who keeps a clean house.

Lastly, dewy mornings reveal the ambitious work of the grass funnel web spiders on our lawns.  Although my lawn is not particularly large, there are hundreds of such webs, with each of their occupants busily catching and consuming insects such as sod webworm moths and other turf pests.  Of course, if insecticides are applied these spiders will also be killed, rendering us dependent on further insecticide use.

The lives of the big spiders are just about done.  After mating, then feeding for a while, the females produce cases containing many eggs.  When this happens, the bodies of the females suddenly appear deflated, and although they may live for a short while, the purpose of their lives has been fulfilled and they soon die.  The eggs hatch later, producing tiny spiderlings which broadcast strands of silk which, caught in the wind, will carry them to new fields or barns.

It’s easy to appreciate birds, because they are pretty, warm, soft, musical, and lively.  Spiders, on the other hand, are labeled “creepy” and give rise to irrational fear.  In reality, they are an important part of most ecosystems, and are another step in the flow of energy from the sun to plants to animals to the soil to who knows where in endless cycles.  As usual, the best way to appreciate them and others like them is to plant yourself in a field for some quiet time and just observe the world around you.  You’ll be surprised at what you’ve been missing.