↓
Home Menu ↓
Skip to primary content
Skip to secondary content
The year in nature is like a long and complicated musical composition in four major parts.  It starts out quietly and thoughtfully in winter, reaches a frenzy of notes in spring and summer, and then gradually subsides in the fall. 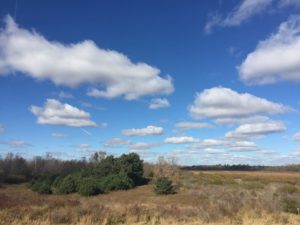 Even though things quiet down as fall progresses, life has a way of surprising us.  Even though we don’t always see what we like to call “Indian summer,” there is a little, final, burst of spring in the midst of autumn.  One has to look for it, but it shows itself in a hundred different ways to those who go outside to look for it.
Lately, even though the high temperatures have only been in the 40’s and 50’s, robins and red-winged blackbirds have been singing, just like they do in March and early April when they return to the area.  Song and white-throated sparrows, golden-crowned kinglets, and others sing too.  Even our winter birds, like chickadees, house finches, and juncos can suddenly burst into their spring songs.
Plants, too, sometimes surprise you in the fall.  Its not uncommon to see forsythia bloom again, although not as enthusiastically as in spring.  Friends have reported marsh marigolds and skunk cabbage flowering also. A plant-ecologist friend told me it may be in response to the flush of extra nutrients available to them after leaves fall in combination with day length which is similar to spring.
And in looking for optimistic wildflowers our downward gaze makes us aware of all the fungi, spiders, and millions of other small things that make the forest whole.  Maybe that’s the best thing about fall – the awareness of the cryptic, quiet, ceaseless activity that makes everything work.
We think in terms of Halloween this time of year, but ancient Celts celebrated Samhain – the end of the harvest season and beginning of winter.  They felt that at the change of season the door to the spirit world would open briefly.  They embraced the time of year with bonfires and parties (I suppose we have Packers games and costume parties).  They held such festivals at each season, celebrating the change.
So even though we think of things winding down for the year, its still possible to find beauty and wonder outdoors.  One may have to get out of the wind to be able to enjoy the day, but every venture outside can reveal something special, something we should celebrate too.
photo- view from the tower at Woodland Dunes by Nancy Nabak