On Sundays, we visit my mom who is in a wonderful apartment in an assisted living facility.  Truth be told, after raising my siblings and me she certainly has earned the right to a little extra TLC. However, on Sundays we pick her up for lunch and a little shopping.  The complex in which she lives has some lovely gardens which include many crabapple trees, and a few bird feeders.  The plantings are in a sheltered spot and present a very nice place in which birds can hang out. I’m sure it wasn’t intended as a bird place, and perhaps most people don’t even notice, but there are always birds there. 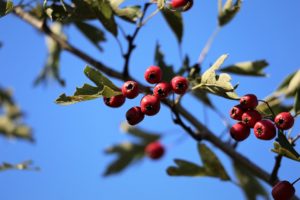 This past weekend was exceptional in that way, the flowering crabs are now full of fruit and the gardens were full of birds.  I would guess there were at least 50 robins along with starlings and house sparrows – hundreds of birds altogether in the space of less than half an acre.  And although they weren’t rare species, or even that desirable in terms of the last two, the abundance of birds was a good thing overall, and there were undoubtedly other species like cedar waxwings that I wasn’t detecting during my brief visit.

The crabapples that the birds were feeding on come from a large family of fruit-bearing trees that are native to temperate regions around the world.  Because they bear abundant flowers in the spring we’ve chosen to hybridize them and invite them into our yards.  The flowering crabs that we tend to plant aren’t strictly native, but they may be close enough in relation to their wild cousins that wildlife uses them- pollinators in the spring when they are in bloom, birds and other animals in the fall when their fruit is ripe, and insects in between during the growing season.  They don’t always provide as much benefit as native species, but they do provide some and at important times of the year.

Recent research indicates that during migration periods, birds which have access to good nutrition and habitat build up their energy reserves more than those living in poorer conditions, and thus are able to travel farther when they migrate. By traveling farther, they have to make fewer stops, which means they are less exposed to dangers encountered in unfamiliar stopover areas. Birds that have better habitat and nutrition survive their migrations better than those which do not. This may be especially important because migration is the most dangerous time in the life of an animal. Other recent research indicates that populations of wildlife species have decreased about 60% since I was in high school.

Of course there are stories about birds eating fermented crabapples and other berries and suffering the consequences. There was such an instance out of Minnesota a few weeks ago. Under the right conditions, fermentation can occur resulting in high ethanol concentrations in fruit, which can even result in the death of birds. I can’t say that I’ve really ever seen this myself but I know people who have, and there is research to support that this happens. Being that we don’t find large numbers of dead birds under fruit trees typically, this must not be a common occurrence.

So if you’ve planted crabapples or hawthorns in your yard, the birds and I thank you. I hope they make you happy with their flowers, shade, and fruit, and all the wildlife that gathers there. In planting them you have done a small but very positive thing, and have made the world a little bit better. And those little things add up.

Photo of the fruit of a hawthorn tree via Pixabay