A few weeks ago, I was visiting a family member when she told me something “disgusting” sprouted up overnight in a border garden in her yard. Naturally I was intrigued, as was my 8-year old niece, so we went to investigate. 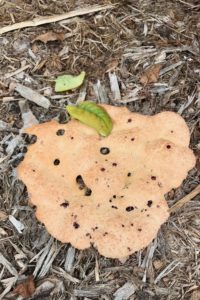 From across the yard, we could see a light-colored blob on top of the mulch. We slowly approached and looked at the dried foamy mass. It was the size of a large dinner plate and contained red, jelly-like blobs. Was this a pile of dried scrambled eggs and ketchup dumped by a neighbor? Did an animal get sick? I took a small stick to gently poke it and noted it was slightly crusty.

Wanting to know more, I looked online and discovered that this was a slime mold. This particular variety is common and appropriately named “dog vomit slime mold” because of its physical appearance. My niece loved this!

Slime molds are slimy, odd creatures that are difficult to define, even for those that study them. They are actually not molds or fungi, but are more closely related to single-celled organisms like protists. They thrive in warm, moist conditions and often grow on compost piles and mulch.

The lifecycle of the “dog vomit slime mold” is like something out of a science fiction movie. The stage I observed is known as plasmodium. The blob slowly creeps over dead wood, leaves and other decaying plant matter, eating bacteria as it goes. Once the food source is depleted or conditions become too dry, it’s time for the slime mold to reproduce. It enters the sporangia stage and dries out completely, decomposes and leaves behind dusty spores that blow in the wind. The spores will germinate once moist conditions arise and individual cells communicate with each other by emitting chemicals. The chemicals help the cells find one another and join together, forming the giant amoeba-like organism known as the plasmodium. The cycle continues.

This organism may seem a bit creepy, but it’s harmless. Slime molds are a food source of some beetles and nematodes (roundworms). They also play a significant role in breaking down organic matter and returning nutrients to the soil.

If you come across a slime mold in your compost or mulch, consider observing this creature for a few days. It’s your own science fiction movie come to life!