During our owl-themed school program when we ask the children to describe similarities and differences between some of the owl photos it often comes up that some of the owls have “ears” whereas some do not. This is an excellent observation and allows me to share one of my favorite nature-words. Those are not actually the owl’s ears, oftentimes we refer to them as ear tufts, but, there is an official and way more fun word for those tufts on the owl’s head. Plumicorns! Plumicorns are a tuft of lengthened feathers that are found on the head of various owl species. The word comes from the latin words “pluma” meaning feather and “cornu” meaning horn. Plumicorns = feather horns!

Now, if those ear tufts or “plumicorns” aren’t actually the owls ears… where are their ears? Owls’ ears are hidden under the 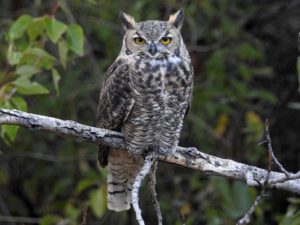 curved lines of their facial disc on either side of the owl’s face. Some owls, such as the Great Horned Owl can even raise its facial disc feathers to amplify sound. Similarly to how if we cup our hands behind our ears the sounds can become louder. Another cool thing about owl’s ears is that their ears are offset with the right ear being a bit higher than the left ear. Because of this, sounds will reach one ear before the other and the owl will then tilt its head until the sound is coming into both ears at the same time…and when it does find that balance it will be looking directly at the source of the sound!

So, if plumicorns aren’t ears…and are just feathers…what are they for? Excellent question! Scientists aren’t sure yet as to what the exact reason for the plumicorns existence is yet, however, there are a few hypotheses that could explain why some owls have them. One of the guesses for why owls have the ear tufts is to help them camouflage. The ear tufts break up the silhouette of the owl and allow them to blend in with branches and other natural features easier. Another guess for why they have ear tufts is for intimidation. By raising and lowering the ear tufts owls can look larger and intimidate other large predators away from their space. Other possible reasons are for communication, species recognition, and for courtship.

Now, even though scientists are unsure as to what the ear tufts are for, they are sure as to what the ear tufts are not for. They have nothing to do with sound and have no impact on the owl’s hearing. They are definitely not ears, as the ears are again towards the side of the owl’s head by their facial disc. The tufts are not crests. Crests are generally a one structure thing at the center of the bird’s head though like ear tufts they can be raised and lowered for communication. The tufts are also not plumes, which are longer and showier feathers that are used during breeding displays. Plumes are often lost after the breeding season whereas the ear tufts are kept year round.

Another interesting thing is that not all owls have plumicorns. Only about 50 of the 225 living owl species have plumicorns. Some of the notable ones around Woodland Dunes with plumicorns would be the Great Horned Owl, Eastern Screech Owl, Short-eared Owl, and Long-eared Owl. Owls without plumicorns from around this area are the Barred Owl, Northern Saw-whet Owl, Barn Owl, and Snowy Owl. Though there is no exact reasoning for why the owls have those feathers yet, they sure are cool!