The woods are becoming more quiet now that most of the fall warblers and thrushes have moved farther south.  It seems that the songs of the chickadees re-emerge this time of year, but really I think they are just lost among the other sounds in the forest.  High-pitched calls of kinglets, brown creepers, and white-throated sparrows are still heard, and the first tree sparrows and purple finches from the North are now at the bird feeders.  Many more are to come, but the stage is set for our next season.

On warm days, there is still a lot of insect activity.  A number of species of crickets are still hanging on and singing, red meadowhawk dragonflies of one species or another still cruise the meadows, and occasionally a late-hatched monarch butterfly is still seen trying to make it to Mexico before winter sets in.

Mammals have been very active in advance of winter.  Red foxes have been seen moving around the preserve in the last week, and  deer are thinking both amorous and combative thoughts now, and seem to forget how hazardous roads can be in the process.  There is also evidence of lots of mice, especially around the barn at the nature center.  Mice can be an abundant food source, and many other animals profit from their abundance.  One of those visited this week, when we heard some small commotion in the barn- rustling and squeaking.  After a minute, a weasel, probably short-tailed, was seen darting among the lawn mowers and planting supplies, occasionally peeking out to evaluate the humans that looked on.

Weasels have a bad reputation sometimes- the larger ones like otters compete with us for fish.  Mink and their smaller cousins, like the long-tailed weasels can prey on poultry.  Badgers dig large holes and can be aggressive if pestered.  Skunks used to be considered weasels, but they are now in a separate family.

But those bad reputations are of course measured against the yardstick of human values, although as I think about it, no mouse would think at all favorably of a weasel. They are active (or hyperactive) and seemingly relentless in their pursuit of good things to eat.  They are bold and curious, cute, and very enjoyable to watch.  Despite the difference in size, they will sometimes approach people to get a better look, and go so far as to perch on one’s shoe.  They can be lured closer by making a squeaking sound, and will sometimes respond with squeaking of their own. 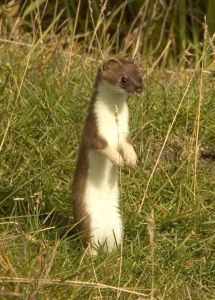 Their long bodies and short legs allow them to pursue their prey in tight quarters, and they are incredibly quick.  They are remarkably adapted to be able to utilize a particular food source, as so many species, both prey and predator, are.  The infinite variation makes one realize again how wonderfully complex and dynamic the natural world can be if allowed to develop to it’s potential.

I was a little surprised that last week’s weasel was still brown on the back and white underneath.  In not too long it will become white to match the coming snow, and transform into what we like to call an ermine- for many weasel species their soft and interesting pelts are their undoing.  Unlike some animals they will continue to be very active through the winter, continuing to give no end of grief to their mousy meals, and doing their part to keep the natural world in balance.