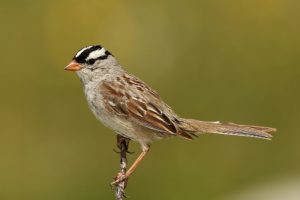 While the spring bird migration seems to explode across the landscape bringing birds that are brightly colored and singing loudly,  the movement of birds in fall seems to me to be more of a creeping thing.  Certainly radar indicates that millions of birds take flight most nights, but here at ground level they just seem to appear in the bushes, often hiding and foraging among the leaves.  They still talk to each other, but instead of their full songs they often emit call notes.  Little Yellow-rumped warblers chip to each other, and kinglets utter little seeeee notes.  Robins still chirp, catbirds mew, and wrens chatter, making their whereabouts known, but without nearly the enthusiasm for song they have in the spring. As in May, different birds might appear each day as they move south.  Juncos are back from the North, and geese, swans, and ducks stop by. Our bird feeders are visited by faithful chickadees and lots of cardinals with their young in various shades of tan and reddish, still begging for food.  Goldfinches also bring their young after their late nesting- it’s nice to see them back.

Two sparrows have slipped back into the mix of yardbirds after four months of absence- the white-crowned and white-throated sparrows.  Both are generally dull-colored sparrows with unstreaked chests, and both sport crowns of black and white, or black and tan stripes.  Not surprisingly, the white- throated sparrows also have white or tan throats.  They are slightly smaller than the white-crowns and perhaps not as bold, but in spring and summer they sing beautifully in my biased opinion, formed during trout fishing trips to the North.  They often prefer to be close to the ground and near dense shrubs.  There are two races which compliment each other- brighter birds with distinct black and white stripes and throats, and duller birds with tan and white instead.  The two forms seek each other out for mating, and both sing as well.  The white-crowns look clean and crisp and are large, bold birds which seem to be at home either on the ground or up on the feeders.  Adults have black and white striped heads, while only young birds are tan and white. 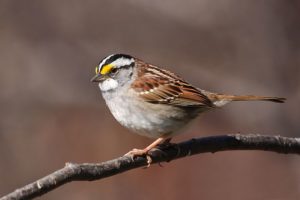 of that, down to our area (we usually have a couple nesting here in summer).  To hear them sing from far back in the swamp forests at Woodland Dunes is a special treat.

Just like spring, every walk outdoors or peek at a bird feeder can yield a new bird find for the season.  Our position on the coast of Lake Michigan concentrates migrating birds along the shore and brings variety to each day, even if the fall birds creep along in stealth mode.  We are very fortunate to live where we do – with a front row seat to this subtle spectacle.