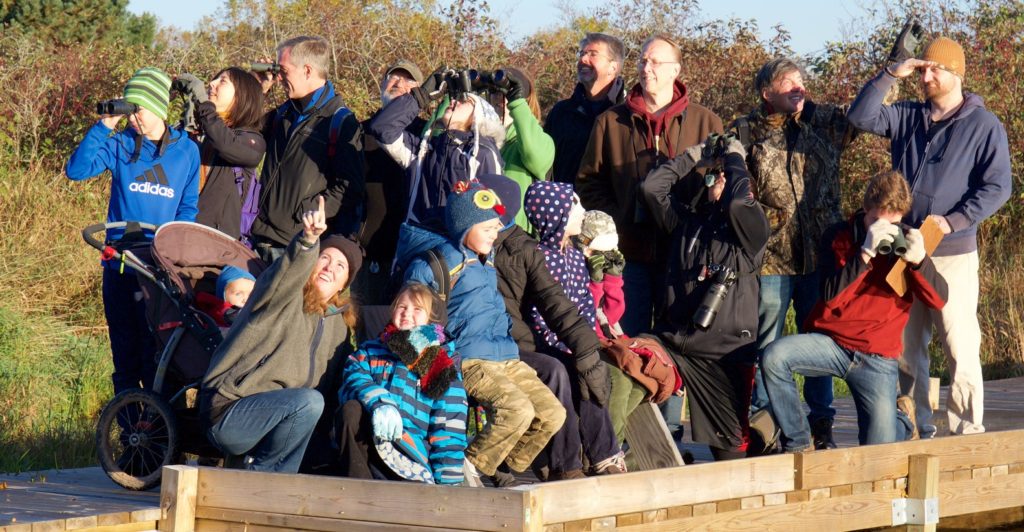 On October 8, Woodland Dunes hosted a visit by a special group- the Wisconsin Young Birders Club.  Led by a Madison high school student, Ryan Treves, the group arrived early and found the Lakeshore to be a cool, blustery place that day.

We started the morning learning about our preserve, the surrounding natural areas, and the relationship of these places to the travels of migratory songbirds.  As we talked, the feeders outside the window were being visited by those hungry migrants- mostly white-crowned sparrows.  We set up a mist net and caught some birds – demonstrating the process of data collection that makes bird-banding especially relevant during migration.  When a bird is actually caught and in the hand, we record it’s species, age, sex, length of the wing, weight, and examine it to determine how much fat it’s carrying on its body.  Weight and fat measurements give us an idea as to the health of the bird and how migration is going.

We then gathered our courage and took to a couple of trails.  Immediately, I found out just how good some of these young birders are. While I was pointing out habitat features and songbirds that lurk in the shrubs, younger eyes were quickly spotting migrating hawks- six species in a short time, and identified them all without problem.  Some of the younger birders needed some help, but clearly this was a group that knew what they were doing.  Their parents were engaged and supportive and good birders themselves. As we walked, our conversations took place on levels deeper than I had expected.

After a quick warm up, we traveled to the Manitowoc harbor and were joined by the venerable Charles Sontag who introduced us to the birds of the containment facility.  The birding was not exceptional (it was noon and still blustery and cool), but there are always interesting birds to be found.  One would not expect a red-tail to be hunkered down on the rip-rap at the shore of Lake Michigan to evade a flock of aggressive crows, or the chaos of hundreds of gulls flushed at the sight of a bald eagle a half-mile away, but we witnessed it.  Again, the young birders seemed completely within their element, although after an hour or so the wind finally wore us down.

As birders, it’s important that we not only look for birds but help them.  I have no doubt that some of these young birders will someday be leaders in bird conservation- they’ve already demonstrated their awareness and understanding of birdlife.  Young people, and their ability to learn, are remarkable.  Parents who take the time to offer their children opportunities in nature are doing them a great service. They’re also caring for our wildlife and our community for that matter.  We should all encourage that.