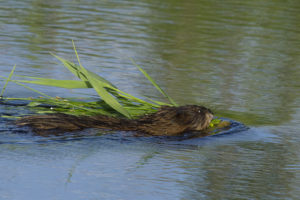 A few days ago, on a perfect fall morning, I was standing outside of the Nature Center with a fellow staff member discussing the upcoming day.  As we talked, we noticed two hen mallards on the pond next to our headquarters.  A muskrat suddenly appeared, and swam quickly and directly at the ducks, which flew a few feet but settled down again on the other side of the pond.  The muskrat again swam at them, and when it came close they flew back to their original place on the water.  This time, when the muskrat again chased them, the ducks put forth less effort in their escape, instead splitting up and swimming in different directions. The muskrat started after one, then slowed, and then returned to a hiding place under the boardwalk.

What does this encounter indicate?  Was the muskrat being territorial? Is there a reason that they would feel threatened by ducks?  Is there some deep meaning to all of this? Its possible there isn’t. What then is the point of this article?  There could be several-first, the more time you spend outdoors, the more interesting things you will see, and your life will be richer for it.

I had a grandfather who spent as much time as possible outdoors hunting and fishing and traipsing around. When I was young and he was old, I was fascinated by the number of stories that he recalled of unusual things he encountered in the woods or on the water.  It made a huge impression on me, and made me want to see those things for myself.  It certainly is true that the more time I spend outdoors, the more unexpected encounters I have.

Anyway, perhaps the muskrat was defending a den, perceiving the ducks to be a potential threat.  Some people report that muskrats are quite territorial, and perhaps this one is a little over-zealous, like cardinals which joust with their own reflections in the spring.  It is hard to imagine a duck posing a threat to an animal as large in comparison as a muskrat.

Perhaps muskrats, noted for being vegetarians, are more omnivorous than we know.  Other herbivores, like squirrels and deer, will eat young birds in the nest when they happen to find them.  Catching a full-grown duck, however, requires spending a lot of energy to catch, and it wouldn’t seem worth it for a muskrat to try.

Or, maybe there isn’t an obvious reason, and maybe this behavior falls into what we call “play”.  Many different species engage in playful behavior, which means it must be an important thing.  There is a lot of speculation about how play prepares young animals for adult life, giving them a chance to hone physical skills in a non-threatening way. But this has turned out to be very hard to prove true or false- there is no guarantee in general that animals that spend of lot of their youth in play are more successful as adults, which seems true for some people I know as well. Although play is important and widespread in the animal world, we don’t know why. But we do know that we feel better if we have some opportunity to incorporate play into our lives. I think we all feel stressed if we don’t.

The muskrat, ducks, and I had all had our breakfasts and were in good condition for the day.  It was a beautiful morning, and nothing urgent was happening in our lives at the moment.  We all indulged in an unnecessary behavior- animals playing tag, and people enjoying watching them do it.  Regardless of “importance,” I think a good morning was had by all.