October is a time for major movements of animals.  Billions of birds migrate long distances, while little forest creatures may move just a few feet to a suitable winter home.  Deer in their rut don’t migrate but move all over the landscape (dodging cars in the process).  Baby spiders send out long strands of silk that catch the wind and bear them to new habitats.  And on and on…

We don’t usually band birds during the nesting season so as not to disrupt that activity, but in fall we catch and band songbirds and a few raptors including owls to help gather information about their movements and lifespan.  This has been happening at Woodland Dunes for about 50 years now. 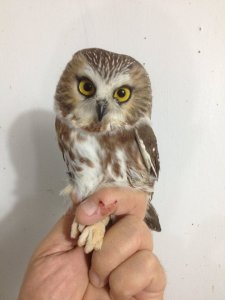 The saw-whet owl season is interesting and unpredictable, and each year is different.  So much depends on weather, and our weather is influenced in turn by Lake Michigan.  The little owls migrate throughout Wisconsin, but don’t seem to want to fly over large bodies of water.  They can pile up and travel up or down the shore of Lake Michigan, which puts Woodland Dunes in a good position to intercept them.  They either move inland or just don’t move when winds are easterly, or south-easterly, so those nights are usually not worth the effort when trying to catch owls.  Southerly winds in general are not good.  When the winds are from the north, north-west, or west and not too strong- now those are the good nights in October.  Except when for reasons we can’t explain, they just aren’t.

There are always interesting things to see and hear, even if the owls don’t cooperate.  Although the owls sometimes avoid our nets, they still gather and respond to the recording we use to lure them, with eerie and sometimes blood-curdling calls.  Hearing them in the quiet, dark forest, one can appreciate their spiritual significance to Native people.

Once in a while a shooting star streaks by.  Or a weasel and a red squirrel tussle in the barn.  The body of short-tailed shrew dropped by an unknown raptor lays lifeless on the trail (shrews look like voles at first glance but apparently taste bad or are toxic to raptors).  Other small animals scurry among the leaves and dry grass, and one feels constantly watched.

Other birds migrate at night.  On most nights, the tiny flight calls of songbirds, different than the courtship or calls they utter when on the ground, are heard often- little peeps from the dark sky.  Recently, the whoops of tundra swans have also been heard in the night as they fly southeastward to the Lake.

And even though the sudden, dramatic cold snap has us thinking about the onset of winter and the end of the year, great-horned owls are already courting, both males and females hooting in response to the other.  Great-horneds are long-lived birds and probably have the same mate (until one of them dies), but even so each fall they reaffirm their relationship with each other before nesting.  Perhaps they know more about keeping romance alive than we do.

The first and last saw-whets we caught this year were veteran migrators- birds in at least their third year according to their plumage.  This means they have made a half-dozen or so migration trips, and in doing so have been challenged with many hazards.  Our hope is that this preserve will be one place that they can stop on their travels and rest and feed in a relatively safe place, not only for them but for all of us.

Photo is a saw-whet owl banded this fall at Woodland Dunes.  Their talons are sharp- hence the bloody fingers!