For many of us, turkeys are an important part of our Thanksgiving celebration. You may consider them tasty to eat, but how much do you know about these birds? Read on to find out some fascinating facts about wild turkeys.

Wild turkeys are native to the United States, but were almost eliminated from Wisconsin in the late 1800s because of habitat loss from settlement, logging and farming. Wild turkeys were also impacted by diseases that spread from domestic birds. In 1976, the Wisconsin DNR traded ruffed grouse for wild turkeys with the state of Missouri. The turkeys were released and did well. As their population increased, the DNR trapped then released turkeys in areas that had suitable habitat. Over 3,000 turkeys were trapped and relocated to 49 counties. Today, the wild turkey population is doing quite well and there is a turkey hunting season. 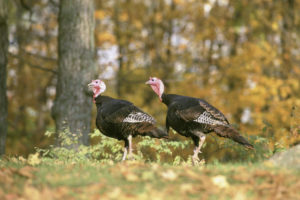 Many people have a strong preference when it comes to eating white meat and dark meat from the turkey, but do you know why they are different? Dark meat is found in the legs of the bird and is made of slow-twitch fibers. These muscles are constantly in use and require large amounts of myoglobin. Myoglobin is a protein that stores oxygen and delivers it to active muscles. The more myoglobin, the darker the meat. White meat is made of fast-twitch fibers used in rapid bursts of powerful movement. These muscles are powered by a carbohydrate called glycogen and contain less myoglobin, hence the lighter color.

Turkeys have excellent hearing and are able to pinpoint sounds over one mile away. They also have fairly good vision and are able to see color. Since their eyes are located on the sides of the head, turkeys have a wide field of view. Their keen vision helps them hunt for food like acorns, beetles, grasshoppers, seeds and even ticks. Turkeys have a poor sense of taste and smell.

To many people’s surprise, wild turkeys can fly. In fact, they can fly in short, powerful bursts (thanks to glycogen) up to 55mph! However, domesticated turkeys cannot fly because they were bred for large breast meat and are not able to flap quickly enough to sustain flight. Even though they can fly, wild turkeys prefer to move around by walking or running and can run up to speeds of 20mph. They roost in trees at night to stay safe from predators such as coyotes, bobcats and mink.

Have you ever seen wild turkey scat (droppings)? You can determine if it was a male or female that left the little gift behind. The male’s scat is shaped more like the letter J and the female’s is spiral-shaped, like a Hershey’s kiss.

photo from the US Fish and Wildlife Digital Library