Millions of birds die each year as a result of crashing into windows.  They simply do not understand the nature of glass and the fact that it reflects what appears to be habitat- trees and shrubs, or that it is not an opening that they can fly into or through.  Window strikes occur when birds are passing by during migration, when they are flying to and from bird feeders, and when they are being pursued by a predator such as a hawk.  Sometimes birds hit at an angle and glance off the glass without much injury.  Sometimes they hit more directly and are stunned, and sit on the ground for a while before flying away.  Although seeing them fly off may make us feel better, I suspect that many of these birds suffer concussions and perish later.  And some literally slam into the window and are killed instantly.  If being pursued by a birdfeeder-raiding hawk, sometimes the hawk, too, hits the window and is killed. 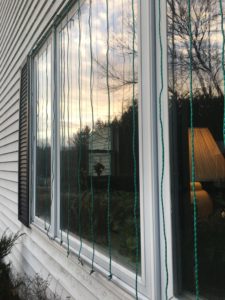 On large, tall buildings, lights within attract night-migrating birds which hit windows and are killed.  There are many studies documenting the mortality that occurs as a result of these collisions, and some cities, such as Toronto and others have campaigns to encourage people to turn off lights at night in tall buildings.  One study by the Field Museum in Chicago indicated that doing so reduced bird deaths by 80 percent.  In addition, the reduction in energy use resulted in a cost savings, so turning off lights was a win for both building owners and birds.

What can homeowners do to help birds avoid windows?  There are a number of things, and many are easy to do.  First, identify where problems with bird strikes are occurring- some windows are worse in that regard than others.  If you have bird feeders, place them either more than 30 feet from a window, or within 3 feet.  Birds very close to a window don’t have space to gain enough momentum to hurt themselves if they fly up, and those far away have more options in the direction they can fly- mostly outward away from the building.  Putting feeders very close to a window also allows us to get really close-up looks at our feathered friends while still enhancing their safety.

There are a number of treatments that can be done to the glass itself to make it easier for the birds to see, and reduce the reflection of surrounding vegetation.  Visible strips can be incorporated into glass, or the surface of the glass etched to make it less reflective.  These can be expensive and must be done by the manufacturer.  Homeowners can apply decals or tape to glass which reflects UV light which birds can see better than we can.  Or a perforated vinyl mesh can be applied through which we can see outward while it cuts reflection on the outside. 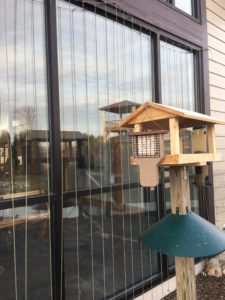 cords hanging down from another single cord strung along the top of a window.  The vertical series of cords are hung about 4 inches apart, and are not joined at the bottom.  As a result they sway in the breeze, and birds seem to notice and avoid them. At my home I have a large window with a bird feeder outside.  A number of birds were observed glancing off the glass of that particular window, so I moved the feeder closer, and made a zen curtain which was hung between two shutters across the face of the glass.  The location is windy, so I weighted the cords with a nut or washer tied at the bottom to keep them from being tangled.  Since then I have noticed no bird strikes.  I used some parachute cord which I had at home already, and invested about 30 minutes of time.  To me, the effort is more than worth the trouble.  There is a company that sells such curtains, but also has instructions on how to make your own- they are found at birdsavers.com <http://birdsavers.com> .

At Woodland Dunes we have used several window treatments to deter birds from injuring themselves, and where we have done so have found few, if any, bird collisions.  Anything you do, even taping up children’s artwork, to make windows more visible helps birds.  And right now, birds need all the help we can give them.