A rare visitor from the Arctic and Atlantic Coast has graced our containment vessel and harbor.  A Brant, which is a small goose, has been seen daily since the first of November.  Birders from Wisconsin and as far as California have made the journey to find this diminutive black and white goose which is about the size of a Mallard duck and weighs only about 2.5 lbs.

When the Brant was first found, it had a badly injured left foot and damage to its right wing; probably the result of a gun shot 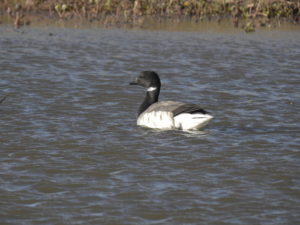 from a waterfowl hunter.  Wildlife of Wisconsin was alerted to
its plight, but were unable to capture the bird because, despite its injuries, it was still able to fly. Even though the extent of the injuries was never completely determined, it has made a remarkable recovery without human assistance.

The Brant nests in summer within the Arctic Circle in northern Canada and Greenland, and during the winter it is found along the Atlantic Coast from Massachusetts south to North Carolina.  And, perhaps this explains how this individual “found” its way to Manitowoc.  Although we will never know exactly how it happened, we can offer a guess; the bird probably became disoriented or displaced by a storm system as it began its migration from the nesting area.  Usually, Brants head south traveling on either side of Hudson Bay, and then veer southeast to the Atlantic Coast.  If the storm disrupted this shift to the east, a continued southward flight would take it to the Great Lakes, and to the Lake Michigan community of Manitowoc.  Intense weather systems are disruptive to more than just human lives.

One question that has been often asked is how can the goose be supported until it has completely recovered?   Perhaps our best support is to enjoy its presence and remember we are really not in charge of nature; we are just one part of this enormous web of life.  Since Brants in winter dine entirely on Eel Grass and Green Algae, feeding it corn or other food material would only go to waste or at worst, complicate the life of the goose.  Presently, the goose is feeding on the grass that has grown in the containment vessel and Green Algae that has accumulated on the rocks along the North Break wall leading to the lighthouse.

Obviously, the fate of this individual is yet to be determined.  Many animals that are displaced from their normal ranges find their way back to familiar habitats, but some do not.  This happens with birds like the Snowy Owl which often makes its appearance in the lakeshore area just about this time.  Snowy Owls arrive not because a storm system misguided them, but by some unknown dispersal system that probably involves their food supply.  The Snowy Owl, like our Brant, ends up in unfamiliar territory and with winter’s end, may return to their normal summer “home.”  The best-case scenario would be that the Brant will complete its recovery in Manitowoc, and with luck return to its former habitat.  And, this will be accomplished without our assistance.