It was a cold and windy day and I was walking outdoors with a friend and her young children. The little ones came upon a small pond that was mostly iced over and immediately tried to break the ice with their feet. As I watched, they stomped through the ice, getting their feet and gloves wet. They continued to play contently, with sopping wet gloves. I affectionately call these two “turkeys”, but as I watched them unphased by the cold and wet, I realized I should probably start calling them “beavers.”

The American beaver is born for aquatic conditions and has several adaptations for living in the water even in the winter. First, 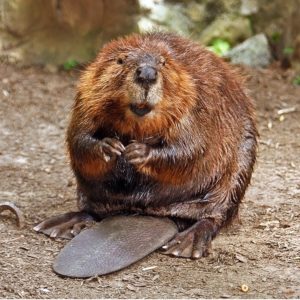 it has a built-in wetsuit consisting of two layers of fur. There’s a shorter, thick underfur which traps warm air against the skin. This is protected by a longer layer of fur called guard fur, which keeps water away from the layer underneath. Beaver fur is also waterproof because of oil produced in castor glands located near the base of the tail. The beaver routinely combs this oil in its fur using a specialized split toenail, called a grooming claw.

When swimming underwater, beavers close valves in their ears and nostrils to keep water out. They also have special lips that seal the mouth but leave the front incisors exposed, allowing the animal to carry branches while swimming. They have a clear eyelid called a nictitating membrane that covers the eyes like goggles, so they can see while swimming. Their hind feet are webbed, which helps them swim. These nifty features come in handy as beavers spend a lot of time in the water and can remain underwater for 15 minutes at a time.

Beavers are often referred to as “nature’s engineers” because they use their large incisors to cut down trees and build a home (lodge) and construct dams in rivers. Why all this busy work? Beavers prefer to swim in slow or stagnant water because it’s less expensive energetically. Damming up moving water and creating a pond, also gives them better access to food. They feed on soft bark and inner bark of trees as well as aquatic plants and fleshy roots.

It’s pretty amazing that beavers are able to eat and acquire energy from such meals. They have a specialized digestive system that allows them to break down and extract nutrients from the wood. Beavers have an enlarged cecum, the pouchlike structure which is part of the large intestine that acts as a fermentation chamber. It contains bacteria and fungi that help digest the cellulose from the bark. Beavers also practice coprophagy, meaning they eat their feces and digest it a second time, thus obtaining as much nutrients as possible. Other animals also practice this, including cottontail rabbits, mice and other animals.

Not only do beavers have interesting adaptations, they are also considered a keystone species because they play a critical role in the biodiversity of an ecosystem. Many species depend on beaver-created habitat and the removal of beavers would drastically change that ecosystem. Habitat created by beavers helps recharge drinking water aquifers, removes pollutants from surface water and ground water and produces food for fish and other animals. This makes coexisting with beavers an important part in protecting the wetlands and habitats of which we are a part.