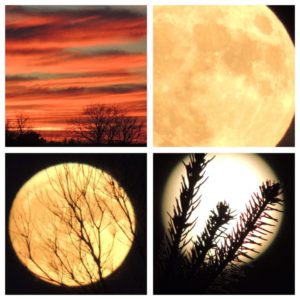 As I strolled along with my dog on our evening walk, I admired the supermoon. It truly was spectacular as it rose above the horizon. As I walked, I was reminded of a song, “Oh Mister Moon,” that I used to sing with my dad when I was a little girl. I hadn’t thought of that song in years! I also remembered lying in the backyard with my parents staring up at the night sky. We would lie on our backs in the soft grass behind the garden and watch the stars and the moon. I could even smell the dewy grass as the memory played back in my mind.

As the Earth’s only satellite, the moon continuously orbits around the planet. Together, they orbit the sun and the pattern of day and night on the moon’s surface constantly changes. The amount of illumination on the face of the moon is called the moon’s “phase.” There are eight major phases: new moon, waxing crescent, 1st quarter, waxing gibbous, full moon, waning gibbous, last quarter and waning crescent. Waxing refers to the stages after the new moon and before the full moon, when the moon appears to be getting larger. Waning is the opposite, and refers to stages after the full moon and before the new moon, when the area that is illuminated is decreasing.

The moon’s orbit around the Earth is slightly elliptical, making it appear closer or farther away at different times of the month. When the moon is full as it makes its pass closest to Earth, it can appear up to fourteen percent larger and thirty percent brighter and is termed a supermoon. The November 14th supermoon was the brightest and largest moon since 1948. According to NASA, the next full moon to be this close to the planet will be 18 years from now.

The moon is about one-fourth the size of Earth, making it a large satellite compared to other planets and their moons. This means the moon has a stronger effect on the planet. The moon’s gravity pulls at the Earth, causing the tides and slowing the Earth’s rotation. Every one hundred years, the length of day increases by 2.3 milliseconds. The moon’s gravitational pull also stabilizes the Earth’s rotation so it doesn’t wobble as much.

In the past, people used the moon to keep track of time by counting from one new moon to the next. This time period equals roughly one month and is called a lunar cycle. Native Americans assigned names to the full moon in each month. The November moon was called the “Beaver Moon” and this was the time of year to set beaver traps to ensure a supply of warm furs for the upcoming winter. The November moon was also known as the “Frost Moon” because there often was frost by then.

The moon has long fascinated people from all over the world. Perhaps we take it for granted because we spend so much time indoors, but events like the “Supermoon” and the occasional eclipse encourage us to take another look at our astronomical next-door neighbor. Pay attention to its endless dance around our planet, and maybe you’ll experience some of the wonder that has inspired people since the first of us gazed on its face.