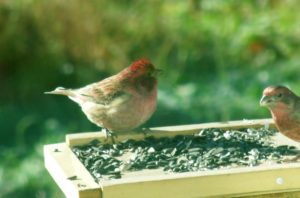 Of all the holidays I think Thanksgiving is the one which makes the most sense to me.  Many of the most important things in our lives can be overlooked in our daily lives, and I think it’s good for us to take a day to appreciate them- our families, our values, and our natural world are three that come to mind immediately.  Truly appreciating each other and the world around us takes some serious thought but I think it’s very much needed now.

On the other hand, I think birds are easy to appreciate, but again it takes some time and patience to do so.  As I write, it is a cloudy, rainy day, cold and inhospitable- but all the bird feeders outside are filled with birds of different kinds. I don’t think they appreciate the fact that those feeders didn’t fill themselves, but I am happy to spend as much time as I can watching the birds empty them.

The change of seasons brings different birds to our area, some just passing through, and others arriving at their winter homes.  The wonderful little saw-whet owls have already come through- we caught about 50 this year.  Three had been banded at other stations- one near the Boundary Waters in MN, one halfway to Hudson Bay in western Quebec, and one whose banding location is as yet unknown.  Three of the birds we banded and released were caught already south of here along the shore of Lake Michigan as they continued their migration.  All were in good condition and were released.

Ducks, geese, and swans seem to be taking their time this fall, probably due to the warm weather.  On Lake Michigan, the long-tailed ducks have arrived from the North- they seem to find our Lakeshore very special.  Other places are hosting some very rare northern birds, like a king eider in Milwaukee.  Some cranes, herons, and kingfishers are still hanging around here, not needing to leave until the real cold arrives.

In the forests, tiny golden-crowned kinglets, very hardy little birds, are still hanging around where there are thick conifers, chatting up the chickadees.  Pine siskins are back, although I’ve just heard a few so far and seen none at the feeders.  The ever-present house finches have been joined by a few purple finches from the north now- sometimes it’s a challenge to tell them apart.  There are plenty of goldfinches, juncos, and more and more American tree sparrows too.  Both white and red-breasted nuthatches are around- the latter being a special treat and sounding like a small squeak toy as they explore.  The nuthatches and chickadees store food when abundant, and have decided that a good place to cache sunflower seeds is in the crack around our front storm door, resulting in a small shower of seeds when it is opened.

Chickadees seem to be just interested in snatching seeds and leaving with them.  The various finches seem to be constantly bickering.  Two species, though, dominate the other seed-eaters- blue jays and red-bellied woodpeckers.  A lot of people don’t like blue jays because they swoop in, scaring off the other songbirds.  I don’t mind them at all- they seem to be the embodiment of the phrase “Go big or go home.”  Unlike the dainty chicks the jays swoop in and gobble a couple of dozen seeds at a time, then fly for cover.  They make so many interesting sounds, loud enough to be heard indoors when the windows are closed, and are a wonderful predator alarm.  A migrating flock recently pestered the living heck out of a frustrated sharp-shinned hawk in our yard, to the point where the sharpie gave up and moved on.

At the feeder, the jays, boisterous as they are, seem to be no match for the red-bellied woodpeckers.  The red-bellys are large enough and are armed with a long pointed bill which they seem unafraid to use, and they stand their ground against the noisy jays and everything else for that matter.  They don’t seem to look for trouble, but they don’t back down either.

The change of season and the birds it brings enriches our lives.  There is so much about nature for which we should be thankful.