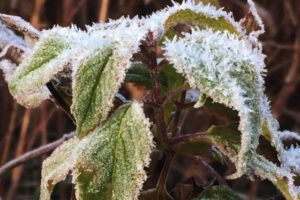 While visiting family over the Thanksgiving holiday, I woke up one morning to a spectacular frost. The stems of leafless plants were coated with glassy white and looked as if someone had used a brush to delicately paint them. It clung to the needles of the pine trees, festively decorating them for the upcoming holidays. Wispy seedheads from grasses and remnants of goldenrod seeds stood motionless and encrusted with crystalline. The ground was also covered with a thick, sugary coating and the morning was grey with fog.

Frost is water vapor or water in gas form, which has become solid. It forms on objects like cars, windows or plants that are outdoors in air that is saturated with moisture. Frost forms when an outdoor surface cools to a temperature that is colder than the dew point of the air next to the surface. The dew point is the point where the air gets so cold, the water vapor in the atmosphere turns into liquid. When the air temperature is cold enough, this liquid then freezes onto surfaces such as blades of grass, leaves and windows. Once the sun rises and warms the air, the frost quickly melts. A great way to explain this concept to children is simply – frost is wet air that gets so cold that it has to lay down for a while, until the sun comes out.

Frost is most common in low-lying areas. Warm air rises into the atmosphere while cool air is more dense, or heavy, and sinks. This means there is usually more water vapor in cool air than in warm air. During the evening as the air temperature drops, the cool air sinks and collects in valleys where the frost will form.

Many of us have observed fern frost forming on windows on a cold winter day. This is created when dew collects on the cold glass and then turns to ice. As more dew accumulates and freezes, a feathery or fern-like pattern of ice crystals appears. Of course homes with newer and better-insulated windows may not witness fern frost, but one can make frost at home. Fill a small metal can (be sure the edges aren’t sharp) about a quarter of the way with water and stir in about four tablespoons of salt. Then fill the cup with ice and mix. Set it down and observe the frost accumulating out the outside the can. The ice lowered the temperature inside the can. When outside air came into contact with the cold can, the water vapor in the air condensed on the can and then froze to form frost.

The morning I woke up to the frosty scene was prime for frost formation. The air was thick with fog, which is water vapor, and the air temperature was cold. The water droplets became beautiful, frozen works of art that decorated the landscape.