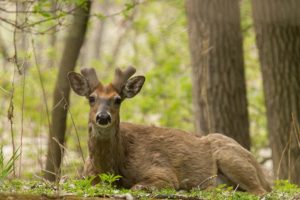 It’s that time of year again. Folks are wearing blaze orange or blaze pink jackets, hats and pants. Turn on the radio and you may hear a man with a thick yooper accent sing, “have you seen da turdy pointer?” It’s deer hunting season and many hunters are talking about bagging a trophy buck with large antlers.

Bucks (male deer) grow antlers to attract females (does) and to fight off other bucks regarding territory or does. While growing, the antlers are covered in living tissue called velvet. The velvet supplies blood to the developing antlers through a network of veins, vessels and arteries. Late in the summer, the antlers will begin to calcify and harden. In September, the blood supply to the antlers is shut off and the velvet begins to dry and will eventually shed.

Antlers play an important role in the breeding success of bucks. The rut, or breeding season, begins in October and can last through December. Fueled by hormones, bucks use their antlers to fight vigorously, sometimes to the death, to show dominance and claim territory and does.

During the rut, the antlers are anointed with the buck’s distinctive scent, a sort of cologne, through specialized skin glands located on the forehead. Bucks rub their antlers and forehead on the trunks of trees, leaving their scent and communicating to other bucks their dominance in the territory. Does smell and sometimes lick the rubs where the scent has been deposited in an attempt to find a strong mate.

The antlers are shed in the winter and will begin re-growing in early spring. Antlers are fast-growing and can increase as much as two inches per week!

Young bucks begin growing antlers within 5 to 6 months of age and are called “button bucks” because of the noticeable presence of two boney structures on the skull called pedicles. At 1-1/2 years of age (yearlings), males grow their first noticeable antlers, which can range in size from spikes to 10 or more antler points

As males mature, their antlers typically become heavier and better developed. On average, antler size increases until 5 to 6 years of age, when antler growth is maximized. Nutrition and genetics are also key factors into the size of a buck’s antlers.