On a November walk, the woods and waters of the Lakeshore seem so different.  The air is crisp and so are the leaves underfoot, and instead of a hundred bird songs there are much less – chickadees, some house sparrows, hairy woodpecker, and a red-tailed hawk- or was it?  At the end of the red-tail’s song there was a musical note – sure enough it’s a Blue jay doing an impression.  Farther along the trail is a very young eagle perched over the water- not a regal, white-headed bird, but a huge blotchy brown and white mass with an enormous hooked bill.  We watch each other, perhaps 100 feet apart, and as I slowly continue to approach, it lifts its tail and deposits a generous white mass into the water, as birds often do, before heaving itself into the air to fly across the water to a more comfortable perch.  I’m guessing this bird isn’t aware of the hype and majesty we humans assign to it as our national symbol.  Instead it lives in the moment – being the bird, the predator, and the scavenger it has successfully become. 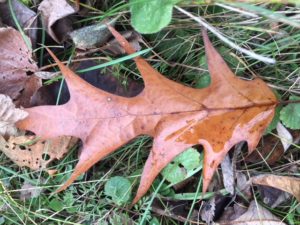 Benjamin Franklin wrote some wonderfully sarcastic lines about the Bald Eagle’s lack of moral character- not befitting a national symbol.  He describes how the eagle sits perched at the water waiting to steal the hard-won fruits of the labors of the fish-hawk (I assume that’s an osprey).  Then he goes on to applaud the tenacity of the sparrow-sized kingbird which can drive an eagle away, or that of the turkey which, motivated by the bright color of the uniform, would drive a redcoat out of the barnyard.  I’m sure we wouldn’t fare too well if we relied on birds of any sort to lead us in battle, but we certainly do seem to like to conjure inspiring images where needed.

On the Great Seal of the United States the poor eagle is indeed spread-eagled in a very unnatural way.  With our national colors plastered on his chest, he or she holds arrows in one talon and an olive branch in the other- the capacity for war or peace I assume.  Olive trees aren’t native to America, but are important in the Mediterranean region and their branches were symbols of peace to Greeks (whose brides and virgins wore olive wreaths) and Romans (you brought them an olive branch when begging for peace), and certainly a good sign for Noah who had the double good fortune of receiving a dove carrying an olive branch.  There was also debate about whether the eagle should face the side with the arrows or the olive branch- it was finally decided that it should be the latter.  In reality, the closest native tree relatives to the olive we have here are the ashes, and the autumn and Russian olives we’ve brought from Europe are nasty invasives and we eliminate them as much as possible.

Instead of a national symbol, the poor turkey has instead been branded as either stupid or the image of bountiful consumption at the dinner table from a supine position on a platter.  Turkey hunters know they are far more than that- like any wild bird they are experts at knowing their surroundings and how to take advantage of them.  So the truth of turkeys seems to lie somewhere between that of Franklin or the table.

Nevertheless, November walks make one thankful for eagles, kingbirds, and turkeys equally I think.  And fallen leaves, resting trees, milkweed seeds and spruce trees.  November is a time to enjoy what may be our last snowless walks of the year, a time to reflect on how good the summer’s growth was, and a time to brace for things to come.  And people- we are so thankful for the many people here who still care about nature, and who help us as we try.  Nothing can warm us after a cold November walk than the people around us- and we need each other as much as we need nature itself.