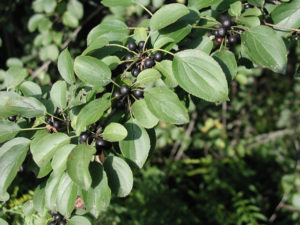 I am among those who question every year why I live where there are four seasons.  Don’t get me wrong, I love watching the leaves change color, and even enjoy the snow.  However, it seems the negative always tries to creep to the surface, and the changing seasons first bring thoughts of cold temperatures and white knuckle driving in icy and snowy conditions.  Slowly, however, I acclimate myself to the temperature change, finding it easier every day to throw on that extra layer of clothes.  Then I remind myself of the beauty of the seasons, as well as the unique activities that can be enjoyed during each season.  Snow shoeing, apple picking, a fall hike, a day spent in the woods perhaps in a tree stand, all lend to being immersed in the natural world around us.

Sometimes we get so focused on something that we forget to step back and look at the bigger picture.  One of my responsibilities as land manager at Woodland Dunes is controlling the many invasive species which threaten the native species.  Mostly we are looking at plants, such as Japanese barberry, various honeysuckle species, and common and glossy buckthorn.  While we know these plants can out-compete our native trees and shrubs, their impacts extend further than that.  I learned a few years ago that Japanese barberry creates a different micro-climate underneath it than what is present surrounding it.  This warmer and more humid space is favorable to the survival of mice, which are hosts for the ticks which carry lyme disease.  In this trickle down manner, the presence of Japanese barberry can lead to an increase in lyme disease cases.  Fortunately for Woodland Dunes, we also have healthy populations of fox, weasels, and other predators which keep the mouse population in check.  There are other indirect affects of invasive trees and shrubs and new ones are being discovered and researched everyday.

I was fortunate to attend the inaugural Southeast Wisconsin Conservation Summit recently.  This amazing gathering of individuals working within the natural world throughout Wisconsin provided the opportunity to network, share ideas, information, projects, and gain an understanding of things we may not have even thought about ourselves.

I was familiar with the idea that buckthorn was bad for the plant community because it can overtake an area and actually emit a toxin into the soil which prevents other plants from growing around it.  However, I never thought about its impact beyond plants before attending the summit.  As I watched the leaves of other trees gracefully fall to the ground to create shelter for overwintering insects and provide future nutrients for emerging spring plants, I never thought about negative impacts of invasive species leaves.  Linh Nguyen, a student at Carroll University, presented information on the effects of buckthorn leaves and the survival rate of amphibians.  Buckthorn produces a metabolite called emodin which leaches out of the decaying leaves and is present in high concentrations in temporal ponds in the spring.  This kills tadpoles as their livers aren’t fully developed and cannot filter it.  Susan Lewis, also from Carroll University, presented research on the effects of buckthorn leaves on amphipods.  Amphipods are natures recyclers, shredding and decomposing leaf litter in waterbodies.  Her research showed that amphipods preferred to eat buckthorn leaves over ash tree leaves (the two dominate tree species in the study area).  However, the buckthorn diet lead to higher mortality and lower body mass.

Examples like these remind us why it is good to step back once in a while and think about the whole picture. Fortunately, even if we are just removing invasive species because of its affect on the surrounding plant community, we are also benefiting the entire ecosystem in ways we aren’t even aware of.  This just makes our work even more important and re-energizes us to keep fighting the good fight.
Jennifer Klein, CA®