The other day I heard quite a commotion coming from my backyard. I opened up the door with enough time to witness my nearly 100 pound puppy racing away from a grey squirrel that was chattering at him from the top of our fence. As Gus raced towards the safety of the house, the squirrel flicked its tail at him, angry that a dog was ruining his dinner time at the bird feeder. Like dogs, squirrels use their tails to communicate. Unlike my dog that only uses his tail to knock things off of my coffee table, squirrels use their tails for a variety of really useful things in addition to helping them to communicate.

Squirrels use their tail to help them communicate with other squirrels. What they are trying to say can sometimes be determined by what motion their tail is making. 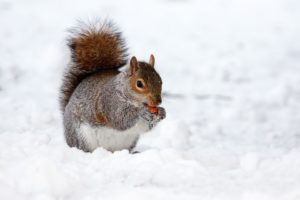 Startled: a squirrel may flick their tail if they are alarmed or startled by something, even if another squirrel is not around. This is a warning to the predator (or whatever they deem as a threat) that they see it and will gladly run away if they get too close.

Mating season: during mating season a squirrel will tremble its tail to try and attract a mate.

In addition to communication, squirrels will use their tail for a variety of other things such as:

Balance: Their tails help them balance as they race across tree branches or power lines. As they walk across the narrow surfaces they will continuously move their tail to counterbalance them as they go.

Falling: Perhaps they didn’t balance all that well (which happens) and the squirrel falls from up high… well they are likely to be perfectly fine as their tails act as a parachute to slow their fall. The tail can even be used as a soft crash pad for when they land.

Warmth: Squirrels don’t hibernate, so they are up and about during even the very cold winter months so their tail is used to help keep them warm. When they are in their nest, they wrap their tail around their body like a fluffy blanket. If a squirrel is laying on a tree branch (where it can’t curl into a ball), it will lay flat and put its tails over its back like covering up with a blanket (how cute is that?).

Cooling: Their tail can also be used to help cool them down in the summer. Their bodies are designed to divert blood to their tails which then causes their body to cool down. Because squirrels are constantly on the move, they do not want to overheat, so this feature is critical in helping them avoid capture by predators.

Swimming: Though it is not their ideal situation, squirrels can actually swim! They use their tails to help them steer and stay afloat.

Besides just looking cute and fluffy, the squirrel’s tail helps them survive by helping them warn each other of threats, find love, warm and cool down, balance, and even swim.