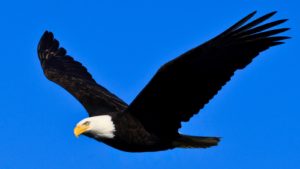 The many dark days of November and December, the result of both cloud cover and shorter day length, are a challenge for people. Personally, I feel much more inclined to move in the morning if there is at least a hint of sunrise, and even cold days are more tolerable if the sun is shining. Birds at the feeders don’t really seem to care however. Their visits are perhaps more concentrated, with about five hours less time between sunrise and sunset to fill their little bellies. Fortunately, they don’t have additional nestlings to feed this time of year, but that energy savings may be offset by constant shivering to stay warm. Some will benefit from the large chunks of beef suet a friend gave me, a calorie-filled treat for woodpeckers, nuthatches, and chickadees.
Raptors are very active this time of year- those which don’t migrate must hunt whenever possible to sustain themselves. When snow is scarce, small mammals can move about easily but have little cover and are susceptible to becoming prey for hawks and owls. Red-tailed hawks migrate, but some remain year round patrolling familiar fields for meadow voles and other creatures.  Later on they are joined by rough-legged hawks from the arctic, which are equally large and use similar habitats. Recently, short-eared owls have been seen here, cruising over grassland at dusk, acting more like a harrier than a typical owl.
But even though winter is just getting started, some large raptors are already thinking about spring. While some hawks like ospreys and red-shouldered might be enjoying the warmth of the south, others are already preparing for spring in a romantic sense.
Some bald eagles migrate into Wisconsin and spend the winter near open water where they congregate and fish. This happens in places along Lake Michigan, but even more so along the Wisconsin and Mississippi rivers, where a hundred or more may be seen together. For those which nest in this area, there are already reports of nest-building happening, and here at Woodland Dunes a pair is being seen daily seemingly eyeing the nest across the river, which has been in use for years. Eagles can be seen this time of year breaking off and hauling large branches for nest construction, which they can do for a couple of months before seriously nesting in February and March. It takes a long time to raise young as large as an eagle chick, so they lay eggs early. Their young leave the nest in late spring and early summer and have plenty of time to learn how to survive before winter comes around again. Not all eagles begin this early, but don’t be surprised to see some nest building or fancy flying among eagle pairs.
Most evenings at my house, great horned owls can be heard hooting in the darkness. Sometimes they are close enough that we hear them when we are inside with the television on. They hoot like that pretty much year round, but it becomes even more noticeable in late fall and early winter as they reaffirm to each other their desire to be partners, calling back and forth to one another. They, too, are looking at an early nesting season, like the eagles.  And they, too, are large raptors which raise large young which take a long time to mature.  They also lay eggs in February and March, and their young leave the nest in May and June.  Unlike the eagles which spend a lot of time nest building and improving, Great horned owls find someone else’s nest, often a hawk’s, and take it over after the other species has left, improving it to their liking.
We think in terms of distinct seasons, but in nature there is a continuum which proceeds slowly and deliberately, constantly changing in small ways. Even in what we perceive is the onset of winter, the seeds of spring are already sown, and they will continue to grow until the world is green once again.