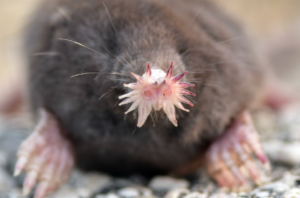 One of the most fascinating and unusual members of the Wisconsin fauna is the Star-nosed Mole (Condylura cristata). Though seldom seen by humans, this animal is widespread on Woodland Dunes properties, and can be active both day and night, year-round. A unique feature of this species is the star-shaped structure of 22 tentacles which surround the snout. As in all mole species, the animal has very poor eyesight, but uses these tentacles for navigating and finding food such as worms, insects and crustaceans.

The Star-nosed Mole is found throughout much of the northeastern United States and Canada, including most of Wisconsin. The animal is dark brown to black in color, approximately 7 to 8 inches in length, including the 2 1/2 to 3 inch long tail. The front paws are wide and adapted for digging with long, stout claws.

The species inhabits a wide range of moist soil habitats including swamp forest, wet meadow, streams, ponds and lakes. It lives mostly within a network of underground tunnels, pushing up excess earth into mounds that give away its presence. An accomplished swimmer, the species is active year-round and will even forage beneath the ice for its prey during frozen-soil periods.

The tentacles on the snout are the most sensitive touch organ of any mammal, containing over 100,000 nerve fibers in an area smaller than your fingertip. Using this sensitive organ, they can identify and eat food faster than any mammal on earth. They even have the ability to smell underwater, by blowing bubbles of air into the water and re-inhaling them to sniff for prey. 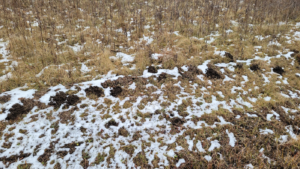 This species is also known to be above-ground more than most moles, and can fall prey to hawks, owls and snakes. Although I have never seen one alive, I have found a number of dead animals through the years. Some believe that certain mammalian predators kill them but leave them uneaten because of a foul smell or taste. At Woodland Dunes, I have seen their tell-tale earth work on Willow Trail, Conifer Trail, Goodwin Road, and on the lawn near the observation tower at the Nature Center.