At a bit over 1,300 acres, the preserves owned and managed by Woodland Dunes encompass a number of habitats, but are just a part of the ecosystem of the Central Lake Michigan Coastal Ecological Landscape. It is just 1 of 16 such regions in the State and each has important ecological attributes, components, and species.

Each contains not only distinct habitats but also ecotones, where different habitats border each other across the larger continuum of habitats in the landscape.  Each has ecotones that reflect the interface of natural habitats and human habitats.  Many people long to be at that interface, and have the wild things of the world close to us- interesting birds and other animals in our yards, the different species of trees in the forest, and other things that make nature a regular part of our lives.  Of course some of those interactions can be annoying, like mice wanting to take over the house in fall, or woodpeckers drumming on cedar siding, or hundreds of bushels of leaves to move around.  But others are fascinating and make our lives more interesting. 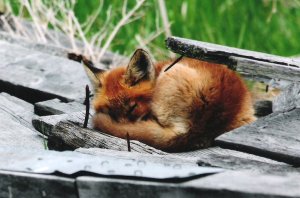 For example, a couple of days ago we happened to look out a window at the center at the Cattail Trail boardwalk, and at just that moment a red fox hopped up onto it and walked toward our headquarters.  Red foxes are by no means rare- there seem to be healthy populations of both reds and grays in the preserve- but you see their tracks more than the animals themselves.

This fox was very interested in the ecotone that is the yard at our nature center.  As we watched, the fox zig-zagged around the observation tower, pausing to urinate.  Then over to the butterfly garden, where he again marked a spot.  Then to the nature play area, where again he- well, sorry kids.  Then to the prairie planting along Hwy 310 where not only marking but a good scratching was needed and he sat for a couple of minutes tending to a special itch as cars drove by not far away.  After a couple more markings, he looked both ways before crossing the highway and moved on to the woods to the south.

Although we think in terms of owning the land, clearly this animal has also claimed it for his own.  The habitat must suit him, for he had a beautiful coat and huge tail, and his behavior indicated nothing but comfort with his surroundings.  Even though we’re here for our workdays, I’ve no doubt that this animal knows the immediate property far better than we do.  His survival depends on it.  And no doubt he’s familiar with the other residents- the mice and voles, rabbits, red squirrels, weasels, mink, deer, birds, and people, that frequent the few acres around the nature center.  And has the ability to adapt as the land and its inhabitants change- red foxes have a very broad range around the world, and the one’s we see may be descended from European animals.  In Europe, foxes are increasingly sharing urban areas with people, as our raccoons have learned to do.  Humans attract a lot of suitable prey for foxes, like rodents, and also leave the remains of their own meals (garbage) and enrich the environment around them (not necessarily in a good way).

So perhaps the benefit of wildlife in our yards is twofold: not only can we enjoy wildlife for its own beauty, but viewing wildlife causes us to think about our place in the ecology of the habitats we create for ourselves.