One of the best things about nature study is that you never know what you are going to find.  The more we learn about the complex workings of the world and it’s life, the more we become aware of exceptions to the rules.

For example, last winter saw many snowy owls migrate to Wisconsin- such irregular, large migrations are called irruptions.  More than 200 snowys were seen around the State, and several were radio tagged so that people could follow their movements online.  Its unusual to have such irruptions two years in a row—but lo and behold a good number of snowy owls are again being seen in Wisconsin this December.  Some excellent photos are being captured and posted on birding social media sites, illustrating just how beautiful, and variable in appearance, these large owls are.  However, sometimes photographers harass the birds to get those good photos- please don’t stress the birds by flushing and following them around.  They’ve traveled a long distance to find a safe place to survive the winter, and added stress can be very harmful.  Snowy owls are being seen near Green Bay, in the Valley, and the central part of Manitowoc County. 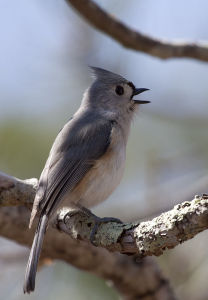 Another unusual bird that visits backyard feeders is the tufted titmouse.  They are related to chickadees, are light gray in color with a crested head and beautiful dark eyes.  They are common in the south, and over the last couple of decades have been extending their range northward, and are now found in many places in southern Wisconsin.  Last weekend we had the first titmouse visit feeders at our home north of Manitowoc.  I wonder if their movement to the north is made possible by climate change, but whatever the cause they are very welcome at my feeders just because they are so darn cute.

An even more remarkable observation lately has been that of a female rufous hummingbird, usually found in the western and southwestern U.S., that visited a yard in Manitowoc for several weeks. They are the same size as a ruby-throat, but have a rustier appearance as their name suggests.  Even though the temperatures were below freezing (hand warmers were used to keep the nectar feeders from freezing also), the bird remained eating insects and spiders in addition to nectar.  The bird was caught and banded by a specially trained and licensed hummingbird bander, and it was found to be in very good condition and was released.  Rufous hummingbirds are among the earliest to migrate north in spring along the west coast and have a greater tolerance to cold than our usual ruby-throated hummers- in this case the bird appeared to do well even though temperatures reached single digits at night.  A few days after banding, the bird departed on its own, presumably for warmer places. 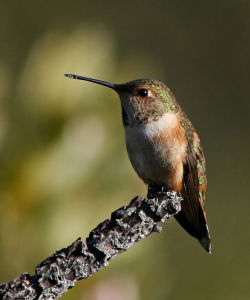 One wonders if these rarities are the best or worst examples of their species- birds that simply were lost, or perhaps those with superior adaptations that allow them to stretch the limits of their ranges.  To those who are interested it doesn’t really matter.  Either way they are a treat for the eyes and a reminder that something wonderful and new can appear at any time.